ProdID: 7813 - The Man Who Invented Christmas
Directed by Bharat Nalluri 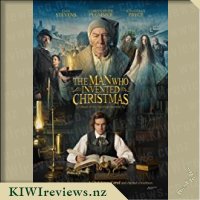 Disclosure StatementFULL DISCLOSURE: A number of units of this product have, at some time, been supplied to KIWIreviews by the company for the purposes of unbiased, independent reviews. No fee was accepted by KIWIreviews or the reviewers themselves - these are genuine, unpaid consumer reviews.
Available:
on DVD & BluRay from March 2018

I watched this film twice, each time with a different group of people; of all the movies I have seen recently, this is the one that prompted the most discussion. However, there were two things that everyone agreed on - first, that the presentation is historically authentic, and second, that it is an account of the story-crafting process rather than a story of Charles Dickens the writer (played by Dan Stevens). So anyone who goes along expecting a simple biography is destined to come away disappointed.

The purpose of the film is to enter the mind of the writer and explore the creative process at play. There are some "real" characters, notably Tara and Forster, who occasionally engage with the "other world" of Dickens' imagination - for example, when they advise him of how he should deal with the character of Tiny Tim. But, for the most part, the decision making and plot development are all the result of dialogues in Dickens' own head. Inspired by the real people that he meets in the course of his daily life, those characters are fleshed out in his imagination, sitting beside him and arguing the nuances of the plot with him. In this way, Scrooge (beautifully portrayed by Christopher Plummer, who all but steals the entire show), Jacob Marley, and the other characters of "A Christmas Carol" each define their own existence.

I think anyone who was not familiar with the original text of "A Christmas Carol" would fail to pick up the many references to it. Not that this would mar the enjoyment of the movie for its own sake, but it could limit the appeal for some. This is an "art" film; the more prior knowledge the viewer has, the deeper the enjoyment value. Even some basic knowledge of Victorian London's history and the social climate of those times would help the viewer to pick up the hints scattered throughout. For example, there is one scene where Dickens the social reformer is engaged in conversation with the "self-made" man with his poor view of the working classes. In a low-key manner, this aspect of Dickens' character is introduced to the viewer and explains why so many of his characters are "working class" and "jail-birds".

References throughout the book are made to "Varney the Vampire", a popular publication of the time. This provides the suggestion that the inclusion of some supernatural and/or bloodthirsty descriptions might boost sales. And, interestingly, Christmas is presented as a secular celebration - apart from the occasional "God bless", there is no reference to any Christian origins; rather, it is presented as a unique festival symbolised by "the joy to be found in friendship, kindness, and generosity".

The title of the film is a giveaway. Many of the attributes included as part of Dickens' celebration have become modern symbols of this festival. Dickens' transition from his childhood poverty as the son of a bankrupt father who ended up in prison to his relative affluence as an adult is hard to believe: although he has no income as yet from his books, and is living on borrowed money, he remains optimistic. Despite the fact that he appears to have no collateral, he has a clearly expensive home complete with servants, and is able to mount an amazing party for his extended family: this includes a turkey, lots of decorations, mulled wine, decorative candles and baubles, floral arrangements, Christmas cards, fruit, the German Christmas tree courtesy of Prince Albert - many items that have become compulsory for modern-day Christmas festivities, right down to the obligatory snow. (Snow in London in late December is actually quite rare, but hey, who cares? It was featured on the Dickensian Christmas cards so it must be right.)

The characters of Tara and Forster are worthy of special mention. The same actors play both the real-life friends of Dickens and the imaginary Ghosts who form part of the creative process. Justin Edwards plays Dickens' bestie, Forster, but is then cast as the Ghost of Christmas Present complete with clothing made of Christmas goodies in best Greek Dionysian style. (Another hint of the pagan origins of the Christmas festival?) Anna Murphy plays the servant, Tara who becomes close to Dickens, although there is never a suggestion of anything other than an innocent friendship between equals. She also plays the Ghost of Christmas Past, reminding Dickens of what has gone before.

Special mention must finally be made of the musical score. At times the music is the only sound within a sequence, but it sets the mood and indicates whether it be humorous or spooky or threatening or just plain whimsical. Sometimes the music seems to add a voice of its own, free of dialogue but nonetheless critical to the viewer's appreciation of the plot development. My verdict? A great piece of entertainment with something for everyone! 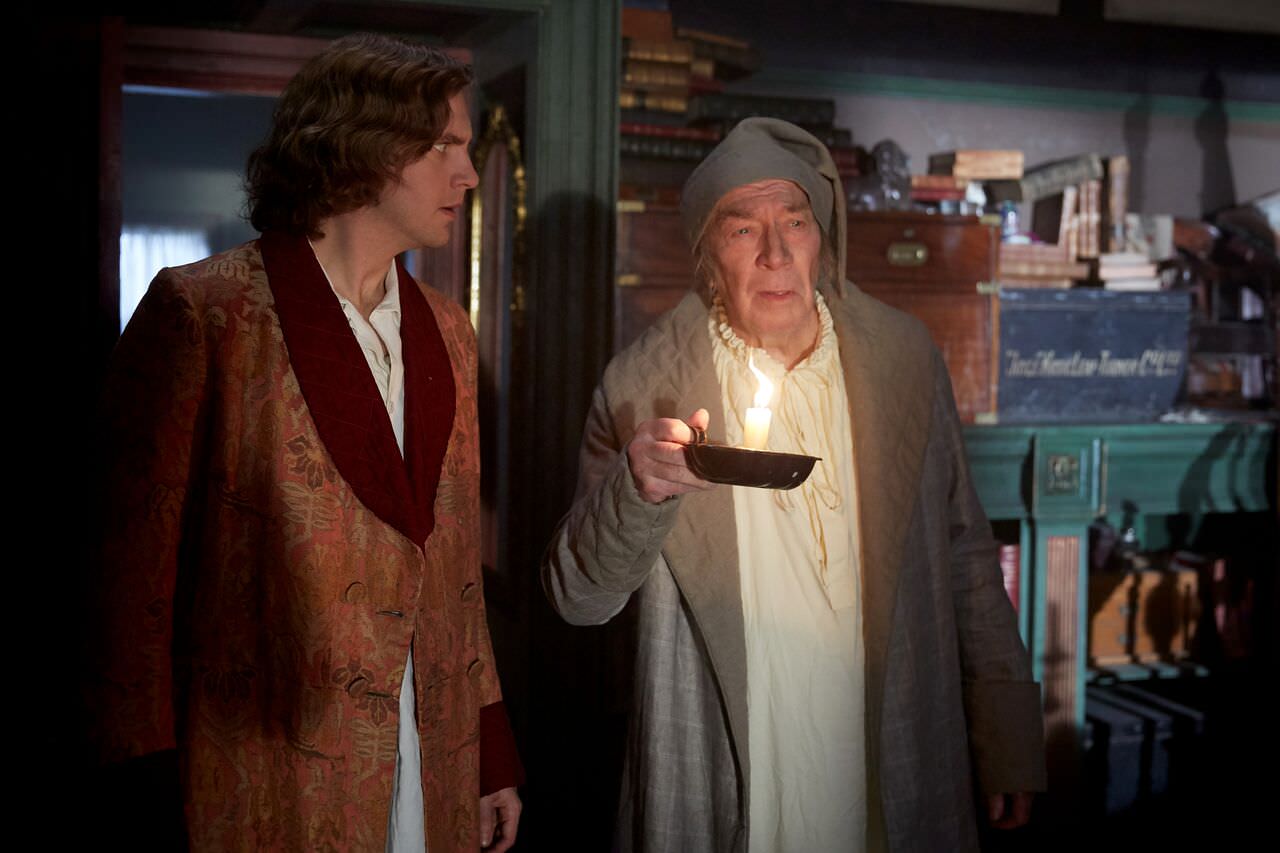 The entire premise of the film seems laughable; a period film based on an author's process of writing 'A Christmas Carol'. But what we end up with is an emotionally engaging drama. No matter how short an amount of screentime the actors get, every character feels genuine and authentic. Perhaps it is helped by the fact that I am less familiar with any of the cast (with the exception of Jonathan Pryce, who I recognise from the HBO tv series 'Game of Thrones'), but I love watching a film, where I legitimately feel like I am watching the characters, and not actors pretending.

I have always had a sense of curiosity around creative people, wondering how they are able to come up with such elaborate stories and histories of fictional characters, so to watch "Charles Dickens" spend so much time and effort determining the name of a character that so perfectly fitted this unknown character that he wanted to portray was eye-opening. The idea of being haunted, bullied, and stalked by these characters throughout the creation of the story was a brilliant piece of work both plot-wise and aesthetically.

The story comes across as a bit of a slow burner, as you acclimate to the period of the film, and readjust yourself to a different way of living; simpler times, with stricter rules, but still has a charm to it. The characters are often aloof and argumentative, but the emotive and mood changing aspect of an artist's personality is a well-documented trait. So while you may disagree with their choices, you can still understand why they did it.

There was a particularly heart-wrenching scene between Charles Dicken's and his father, where words were said, and the full gravity of the potential effects of those words are clear to see. We understand the justification, but we still feel for both characters. The realisation that many of his fictional characters are based on his own personality traits; both negative and positive. Emotionally, the film was exquisite. It really forces you to think unselfishly, to be generous towards others, and it did so in a creative and fun way that had surprisingly few scenes of Dicken's writing.

This is not just a retelling of 'A Christmas Carol', this is a behind the scenes look at its creation. A look at the parts of Dicken's family history that have created such character-defining traits in the well'known author, and provides an idea of the physically and mentally draining effect that the creative process had on everybody involved.

I was unsure what to expect from this film, but I walk away from it with a firm appreciation. Highly recommended.

Score: 10.0
Product reviews for listing 6997: Hunt for the Wilderpeople -  Directed by Taika Waititi

An adaptation of classic Kiwi novel Wild Pork and Watercress, by Barry Crump, Hunt for the Wilderpeople tells the story of misfit kid Ricky Baker (Julian Dennison). When Rickyâ ™s foster aunt suddenly passes away, heâ ™s left alone with his grumpy uncle Hec (Sam Neill). The unlikely duo find themselves on the run in the vast New Zealand bush, evading child services and the law. They are forced to work together to survive and despite ... more...