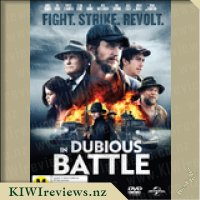 I have read several of John Steinbeck's books but was not familiar with this one, so I came to the movie without any preconceptions about it. However, I had seen the calibre of the cast and was fairly certain that I would be viewing a quality production - and I was right. From the moment the film started, I was glued to the screen. There are many movies set in the 1930s and they convey a stark vision of the Americas in the grip of the Great Depression, a time when working people were struggling to accrue enough money to provide the basics of life.

I expected that the acting in this movie would be of the highest standard, and I was not disappointed. Vincent D'Onofrio (London) and Nat Wolff (Jim) deserve special mention, but the rest of the acting was equally powerful. As both director and protagonist, James Franco (Mac) stood out as a driving force behind the narrative as well as the mentor for Jim in his development as a key character. It was Mac and Jim who set up the union narrative, coming in as strangers with a hidden (dubious) agenda to work behind the scenes, installing London as the token leader while they pulled the strings in the background. London was seduced by them into his role; without them he would not have stepped up to his (dubious) position.

The soundtrack echoes the struggle of the workers. The well-known union song "Which Side Are You On?" really sums up the theme of the movie, which deals with the clash between workers fighting for better pay and conditions and the controlling attitude of the employers. There are none of the polite round-the-table talks and largely peaceful strike demonstrations that people expect today; this was a life-or-death fight which resulted in physical confrontations leading to subversive retaliations for shootings, especially the cowardly acts of firing at random into a crowd of protesters.

The passion of the elected union leader London comes through clearly as he calls for commitment to the cause. The power of a skilled orator can sway a crowd to follow along and become part of a movement - something which every politician, church leader and motivational speaker knows only too well. The scenes where the workers make their pledge to join in the struggle are highlights of the movie; the sense of camaraderie and fighting for a common cause are powerful drugs that urge undecided supporters to throw themselves into the fray.

In terms of historical content, this is a work of fiction set against a very real situation where people were starving and struggling to survive. Families were forced to take any work they could get - not just the adults, but the children as well - and to accept a pittance for their efforts because they were expected to be grateful for having any work at all. Poverty was not the shame of not having your own house or new shoes when your old ones became shabby. Poverty was constant sickness because you could not afford to eat properly or to visit a doctor when you needed to. Poverty was the passport to eventual death. It is important for people today to take this message on board and understand just what sacrifices were made by previous generations so they could enjoy the quality of life that they have today.

The Holiday is a 2006 American romantic comedy film starring Cameron Diaz and Kate Winslet as two lovelorn women from opposite sides of the Atlantic Ocean, who temporarily exchange homes to escape heartbreak during the holiday season. Jude Law and Jack Black co-star, with Eli Wallach, Shannyn Sossamon, Edward Burns and Rufus Sewell supporting.

After bad bouts of man trouble just before the holidays, Amanda Woods (Diaz) and Iris ... more...