« Bring It On: Worldwide Showdown review 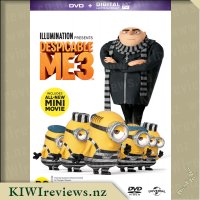 Illumination, who brought moviegoers Despicable Me, Despicable Me 2 and the biggest animated hit of 2015, Minions, continues the story of Gru, Lucy and their adorable daughters - Margo, Edith and Agnes - and the Minions in Despicable Me 3.

After he is fired from the Anti-Villain League for failing to take down the latest bad guy to threaten humanity, Gru finds himself in the midst of a major identity crisis. But when a mysterious stranger shows up to inform Gru that he has a long-lost twin brother - a brother who desperately wishes to follow in his twin's despicable footsteps - one former super-villain will rediscover just how good it feels to be bad.

The kids and I have enjoyed the Despicable Me series, which although each film has been predictable in its own right, have still been fun and provided enough laughs to watch them now and again. Gru has settled into family life and now has a girlfriend, what I really liked about this aspect of the story was that it wasn't all happy families immediately, Lucy has difficulty finding her groove when it comes to parenting the three girls and this leads to some missteps and oops moments, but it was a nice added dimension to the film and a good way to show that step parents don't always just meld into the family seamlessly.

The plot was nothing spectacular but it was fun and moved along at a decent pace. I did feel that the introduction of a unknown twin brother and having no knowledge of his own father, to feel like they were trying a little too hard to create a third film, but it ended up working out OK, even if it was predictable. The music was lots of fun, a hail back to the 80's, not to mention so much of what the villain does in his aim to destroy and live out his TV show fantasy in real life, the little robot sidekick makes me think of 80's Robot from The Muppet Movie which came out six years beforehand. There were a few scenes that were fun, a police riding pigs chase scene, Lucy bounding from giant bubblegum bubble to giant bubblegum bottle and then Agnes discovering a 'unicorn'.

What you get out of this film depends on whether you are an adult or a kid! Certainly there is something for everybody as our audience proved - the oldest person there was over 80 (she would not tell us how much over 80 that might be!) and the youngest was just four. Luckily we had access to a huge screen so we could all watch it together in comfort. Viewing it on my laptop might have been a bit of a challenge.

Although on the surface the animation, goodies-vs-baddies plot, and energetic movement (almost invariably to music) might draw in the littlies, there are some nice little additions that only the adults picked up. That meant out attention was held throughout. Even Mrs 80+ was chuckling away with Mr Four snuggled up to her, totally lost in the moment.

A lot of the music harked back to the 80s, probably because this was the time when Balthazar Bratt was a child star. (Imagine hearing Freedom in the original mono version!) But there are other musical gems as well. I was surprised to hear very-much-pre-1980s Gilbert and Sullivan suddenly erupting from the TV set - of course, this meant nothing to the children, but all the adults knew the air (with slightly different words!!!). And I must mention the computer sequences too, which were very blocky just like the 1980s Commodore and Atari games.

There were echoes of many other movies. Top of the list has to be the James Bond series (and the Johnny English variants!) where gadgets rule and impossible is just a word in a dictionary. But I recognised a copycat scene from the 1960s movie Topkapi, and a dance sequence based on the Michael Jackson Bad sequence. No doubt there were some we did not pick up; I plan to watch the movie at least twice more to see what other little Easter eggs may be lurking ...

Even the children laughed at the section which featured items being thrown at the audience. Unfortunately that could not have been inspired by a real event which had a certain president throwing paper towels in Puerto Rico because the film was completed before that particular episode took place. It would have been fun to link them. Unless this was a case of life imitating art rather than the other way round? I guess we will never know, but it did make everyone smile. Even Mr Four!

Of special note were the pigs who were almost the stars ahead of the minions! The animation was beautifully done, with the pigs being recognisable as animals. Some cartoon animals are highly stylised so it is hard to work out what they are meant to be, but these pigs were close enough to the real thing. Mr Four said he would quite like a pig for Christmas (he already has a toy minion) but nobody commented so he did not pursue it.

All in all, this is a really fun movie. We all loved it and most of the group want to see it again. It is entertaining, funny, clever, and pitched in such a way that anyone can enjoy it irrespective of their age. Incidentally, I have seen the other movies in the series, but it was not necessary to have seen them beforehand. And personally I think this one is the best yet.

I have to admit, I have seen Despicable Me the original movie, but am yet to see number 2 in the series. When number 3 popped up for review I decided to request it in the hopes I would get it and be able to watch number 2 in the mean time. Luckily for me I did receive it, however didn't actually manage to watch number 2 before watching it but I was able to watch number 3 without feeling like I was missing any information. I do like when movies in a series are like this, you can watch them all in a row or you can watch them as stand alone once off movies too.

Once the movie finished I asked my husband what he thought. The first thing that we both agreed on was that the movie has an awesome soundtrack. We are both music lovers and enjoy a wide range and music and this movie certainly had that. Having the character Balthazar Bratt who was a former 1980's child star who was seeking revenge against the world certainly helped this as much of the music played when he was in the scene was 80's. As I grew up in the 80's I knew most of this and many of them are tracks I have partied to on many occasions!

One thing to note about these movies is that they are often quite predictable. You know that there is always going to be an issue that needs resolved and in the end everything comes right. This movie certainly fitted this, but it didn't make it any less enjoyable to watch. As with many animated movies these days they are directed at children, but include a lot of humour to keep the adults interested too. As many people watch these types of movies as a family this is very important, otherwise not everyone keeps there focus on the movie nor do they all enjoy it.

The Minions are always a crack up. They are so cute and definitely bring a lot of appeal to the movie. Sometimes trying to figure out what they are saying is interesting, but it seems they can always say the words to get the important bits of information out. I do think that the creator had fun when making these characters and I would love to find out if there is any documentation anywhere on the Minion language.

Overall, a great family movie that both my husband and I enjoyed. I would like to share it with our nephews and friends children to see if they enjoy it just as much. I know the Minions characters are well liked by all of the children we know so I'm sure the movie would be a hit.

The Age of Wonders is about to begin!

Before she was Wonder Woman she was Diana, princess of the Amazons, trained warrior. When a pilot crashes and tells of conflict in the outside world, she leaves home to fight a war to end all wars, discovering her full powers and true destiny.

An Amazon princess (Gal Gadot) finds her idyllic life on an island occupied only by female warriors interrupted when a pilot (Chris Pine) ... more...