« The Legend of Zelda - Symphony Of Goddesses review 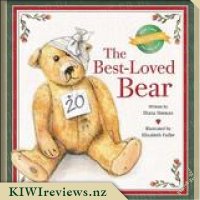 This is a new release of a perennial favourite, repackaged as a beautiful hardback gift edition. A new generation of children can now enjoy this classic best-selling picture book.

All the children in Tim's class are taking their teddybears to school to find out which one is the best loved. Tim feels embarrassed. What will everybody think of his poor old battered teddy?

With illustrations by Elizabeth Fuller.

The Best Loved Bear is a story that I remember from my childhood, I think more from my sister having it than me (as I would have been a little older when it first came out) but I have certainly come across the story a lot since becoming a teacher. It is one that is always found in school libraries and many teachers have it in their personal book collection. Until now I have never owned this book, but I am quite excited to have received this in my latest KIWIreviews parcel. Not only did I get the book, but it is a beautiful hard covered edition of the book that I will treasure for a long time to come.

The story of The Best Loved Bear is a lovely one. Tim's bear is very well loved, he takes his bear with him absolutely everywhere. Because of this he is a little worse for wear. But this doesn't matter to Tim. He and his bear have done a lot together and the dirtiness and raggedness bare many different memories for him. It isn't until one day the children take their favourite toy to school that Tim feels a little embarrassed about his bear. His bear isn't nice and clean like the bears of his peers, and he is worried about how others will react if he takes his bear to school. He attempts to fix the damaged bits of his bear by using a bandage and sticking plasters. He then takes the bear to school hidden inside a paper bag. In the end the state of the bear doesn't matter as it shows just how much the bear is loved. This is where the book title "The Best Loved Bear" makes sense.

All in all this is a nice book with a lovely moral to the story and is one that children over many generations have enjoyed. I look forward to reading this again and again to the tamariki I teach. This is such a beautiful book that Miss Five told me she loved it before she had so much as opened it - the cover alone sold it! There is something very special about a book that is in a hard binding, especially as it appears that this one is destined to become a favourite. To her delight, Miss Five found that she was able to read it herself with some help from the rest of the family. It is amazing how empowering this is for a small child who six months ago could not read at all.

The story is a delightful fable about what really matters in life: outward appearances, or what is on the inside. Tim's bear is battered and threadbare in places because he has taken it everywhere with him. Miss Five could relate to that - she too has a couple of special toys that she has had since she was a baby, and which still sleep on her bed each night. I told Miss Five about the doll I had as a young child. It had a china head which had pieces chipped out of it - it had survived being in a tornado with me, but the damage was part of her life story and we were inseparable. Miss Five loved that story!

The little boy in the book is quite happy with his special teddy until the day that all the children are asked to bring their favourite (best loved) toy bear to school. He is ashamed because his bear is not clean and new like the other children's bears, and he thinks he will be embarrassed if he brings it in. So he tries to hide the damaged bits by adding a bandage and a sticking plaster, and taking him to school hidden in a paper bag,

Of course, all ends well and Tim realises that his bear's worn bits just show how important he is to Tim.
This is a wonderful life lesson for children in accepting others and valuing them no matter what they may look like.

Finally, I have to make special mention of the art work because both Miss Five and I were really taken by it. The pictures are the same ones that appeared in the first edition of the book, when it was published in soft cover format, but they have a timeless quality to them. The dominant colours are shades of orange (as befits a bear!) ranging from yellows right down to browns, all pulled together by the delicate pencil strokes which are a perfect match for the bear's fur.