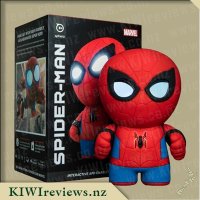 Join forces with Spider-Man and enter the Marvel Universe like never before. This voice interactive Super Hero brings Spidey to life and features hours of entertainment. Embark on missions against the most notorious villains in engaging experiences. Every decision you make creates a new path forward, so your unique journey will continue to evolve. Spidey's Wi-Fi capabilities allow for new missions, villains, and other automatic updates. When not fighting bad guys, hang out and strike up some banter with your friendly neighbourhood hero. Spidey's reactions and signature snarky attitude are sure to keep you on your toes.

Built with fully animated LCD eyes and motion detection, Spider-Man is as expressive as he is perceptive. Watch him react to people passing by, set him to wake you up, or have him guard your room to stop snooping siblings. The tech in this interactive, immersive, and intellectual Spidey empowers you to be his heroic ally. Sphero made their name with the release of the Sphero ball... a remote-controlled ball that you could drive around and make it do all sorts of stunts. Then, they hit a new market with the Ollie, and it's evil twin the Darkside Ollie - this is where hints of Star Wars began to creep in. This led to the release of the BB-8 Star Wars Droid... from here on, things get a little... odd. The two latest releases from this innovative RC company are a talking Lightning McQueen from the Disney•Pixar movie Cars, and this little talking Spider-Man.

I have to say, I struggle to see how this fits with their product lines so far, since this is the only one of their entire range that doesn't actually move. Sphero built their reputation on remotely-controlled moving toys, but Spidey here stands still, talks a lot, and talks more, and even more. He will talk you through adventures, he'll tell you jokes, he'll make lots of noises, you can swing him around as part of the interactive adventures... but as a solid member of the Sphero line-up, he's a bit of a diversion from what they are best known for.

That said... kids will probably love him. He's got cheesy jokes, he has an alarm function, motion sensors (that aren't very sensitive, I must say, so his 'guard' function is a bit hit-&-miss), and he'll keep them occupied with many, many, many tall stories. I tested this one out with my 9yr old. He has an imagination that just blows me away, and he too likes to talk, talk, talk - telling himself stories until it all hours of the night. I thought they would get on like a house on fire.

Mixed results, is the best way I can put it It was a huge hit for the first hour, and got progressively less appealing after that. After 3 hours of playtime, he said he wanted to read a book instead. For this little man, that's saying something. I asked him to talk me through the best and worst bits, and he was quick to say that he found the jokes funny and the stories short but boring because there was nothing for him to do but listen. Some of the adventures were fun, especially ones where he got to yell "ATTACK" and trigger his chosen super-power, and the ones that required him to pick Spidey up and whirl him around, though he also pointed out that doing that bit made him very nervous because Spidey isn't easy to frip with little hands.

Overall, I'm not sure if this is going to prove a winner for Sphero, or whether it was an attempt to jump on the Marvel bandwagon and simply the wrong idea. Perhaps they would have been better to have tried Cosmo the telepathic dog - at least then they could have piggy-backed on any number of animatronic walking-dog bots and re-purposed the chassis. For me, as an adult who is quite an Avengers fan - I feel this is a dead-end line for Sphero. Heck, for any brand really. But there are bound to be kids out there who will find this fun... at least for the first hour.

Jacque is a bright colourful peacock with squeaks, crinkles and rattles, as well as many different textures and a mirror for baby's entertainment and growth.