« Diary of a Minecraft Zombie #6: Zombie Goes To Camp review 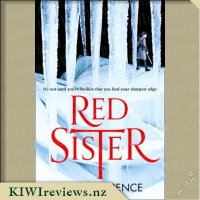 "I was born for killing - the gods made me to ruin"

At the Convent of Sweet Mercy young girls are raised to be killers. Some have inherited old bloods, which bestow upon them special talents. Sweet Mercy hones its novices' skills to deadly effect. It takes ten years to educate a Red Sister in the ways of blade and fist.

But even the mistresses of sword and shadow don't truly understand what they have purchased when Nona Grey is brought to their halls as a bloodstained child of eight, falsely accused of murder, but guilty of worse.

In her short life, Nona has made many powerful enemies, and despite the security and isolation of the convent, her secret, violent past will one day find her out. Nona must come to terms with her demons and learn to become a deadly assassin if she is to survive.

This is Book 1 of the new series, Book of the Ancestor

This is the first of Mark Lawrence's books I have read so, although the jacket information led me to believe I would enjoy it, I approached it with a completely open mind. It is a long book (500 pages); normally I would read a book of this length fairly quickly, but I did find myself rereading some sections in case I had missed anything so I took longer than anticipated to get to the end. Having the glossary at the front of the book was brilliant; I consulted it frequently and found it a useful reference point - although Giljohn, who is a minor character frequently referred to in the course of the story, does not feature at all!

I was seduced by the style of the narrative. It is seldom that you see a longer story crafted so beautifully. Lawrence's prose is compelling, almost poetic at times, and his descriptions are so vivid I found myself sometimes wondering how well they would translate to the big screen. It is obvious that a great deal of planning and editing have gone into the book to ensure it reads smoothly and seamlessly.

The story has affinities with many other works of fantasy fiction. I could pick out similarities with the Lord of the Rings saga and the Harry Potter books, and also with the Game of Thrones TV series. The imaginary, often dystopic world which forms the setting for the Sisters of the Convent of Sweet Mercy is a place of winter and deprivation, harsh rules and prescriptive customs which govern the lives of Nona and her friends. Each of them has one or more special talents according to her genetic heritage, and these talents are the tools to be used to save their world. Magic is an essential part of the mix!

I appreciated the fact that the last fifty pages or do were the fastest moving and most exciting of the book. Frequently books tend to end with no real resolution to the problems the characters have encountered, and I find that "fizzle out effect" annoying. Without giving the plot away, I can share that this is one of the most satisfying endings I have ever encountered in a novel. By the time I had reached the last couple of chapters I could not put the book down as I absolutely needed to know what would happen. There is enough material in this ending to provide the stimulus for the next (planned) book in the series, but this volume is complete in itself so does not leave the reader frustrated for want of answers!

A plucky little robin sets out on an epic journey
Through dark forests, driving rain, clapping thunder and flashing lightning
Across frozen wastes, huge mountains and stormy seas he flies
And all the while he's dreaming of home
Of her
But will he ever get there?