Doctor Who - The Return Of Doctor Mysterio review 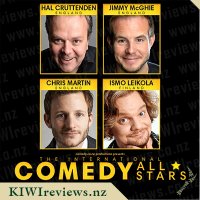 Four international pro comedians will be hitting the road bringing some of the globes' finest, and most hilarious comedy to Hamilton, Tauranga, Rotorua, New Plymouth, Wellington and Napier this April and May. Fresh from the 2017 NZ International Comedy Festival powered by Flick Electric Co. these stars of the comedy circuit offer world-class stand-up from the UK and Finland.

The tour will start in Hamilton before moving on through Tauranga, Rotorua, New Plymouth and Wellington before concluding in Napier.

Oh my god, did I laugh... there were patches I laughed so hard my ribs ached and I thought I was going to pass out. I would have felt sorry for those sitting around me, having to put up with my gasping and crying in mirth, but they were doing the same so... hey, it was all cool.

There's something about Brit comedy that I have always admired and understood. Maybe it was my upbringing with my British grandparents, maybe it's because I appreciate Monty Python... or maybe I just like a joke that has some actual thought behind it and a layered punchline... whatever the reason, this show was the absolute best comedy fest I have come across in many years - and to have a Finnish comedy thrown into the mix was a treat indeed, though I do wish Ismo hadn't played on the "lost in translation" trope so much.

We were treated to a show full of laughs based on reflections of today's world, some great audience heckling (thank all the luck that I wasn't seated in one of the first 3 rows!), and some amazing humour based on, of all things, the interaction between the stars themselves and a highly interactive element of the audience. MC Jimmy McGhie was first out, and made a number of 'probing' jokes to test out the audience, and to his delight - and ours - there was a good number of audience members willing to shout out answers, quips and commentary on his routine. This set the pace for a rollicking night of hilarity and howls of laughter.

Chris Martin followed on, and made the audience completely aware that he was NOT the Chris Martin from Coldplay, despite both having the same middle name - John - and his biggest wish in life so far was to have an owl play a starring role in his wedding ceremony. His tale wasn't all that funny, but man, the delivery sure made it so!

After intermission, we were treated to the Finnish ramblings of Ismo Leikola, who was a true delight... if a little creepy with some of his comedy topics. Drawing heavily on the "English is my second language, and it causes all sorts of comedy situations" trope, Ismo led us a merry dance through his life as a travelling funny-man, which lead us nicely into the finale delivered by Hal Cruttenden who, of all the performers, was the most tame and least at risk of making me wet my seat cushions. Though it may sound like a disappointing end, it was actually perfectly pitched to bring the audience down to a semblance or normality without sacrificing any of the laughs - nicely played Mr Cruttenden, nicely played.

Overall, a stunning show, and if you find tickets still available at your local show, GET THEM! Take tissues, a spare pair of pants, and an adult diaper if you feel the urge. You never know... 'coz these guys are FUNNY!

Score: - pending -
Product reviews for listing 6182: There and Back... Sol3 Mio Live in Concert Tour -  Performed by Sol3 Mio

Made up of two tenor brothers, Pene and Amitai Pati from Mangere, and their North Shore baritone cousin Moses Mackay, SOL3 MIO is the combination of three powerful and moving operatic voices, with more than a dash of uncontainable Samoan humour. By their own definition they are first and foremost 'classical singers bridging the gap with ... more...