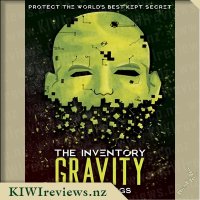 Hidden under a small suburban town, The Inventory is a collection of the most incredible technology the world is NOT ready for: invisible camouflage, HoverBoots, indestructible metals, and a giant battle robot just for starters. Lot's Dad is the mild-mannered curator of The Inventory, and he gets to see some CRAZY things.

This book follows on the events of The Inventory Book 1: Iron Fist, where The Collector failed to escape with the Iron Fist. But now he is armed with another super-destructive weapon: Newton's Arrow. This powerful cannon can send a gravity wave anywhere on Earth and now it's being used to blackmail governments.

Mr 12 helped me to review the first book in this series ("Iron Fist") when he used to be Mr 11, so I asked for his help once more. He was more than happy to do so, but this time I made sure that I had read it first as we had read "Iron Fist" at the same time and kept arguing because we both wanted the book to ourselves! After finishing "Gravity" we had reached the same conclusion as to its merits. Yes, Book 2 in the series is even better than Book 1! It is a fast-paced, compulsive read which neither of us could put down.

I like the way Science Fiction blends with reality to the extent that the reader is often left wondering whether certain events and possibilities have actually happened. And it is sometimes really hard to decide whether a particular term is a real word, a neologism, or just plain wanna-be-speak. I found myself consulting dictionaries several times to check up on the status of a word so I could be clear in my own mind!

There is an interesting subplot to the story. Although it is on the surface a fast-paced adventure story which spans continents, moving through time and space at breakneck speed, it is also a story of friendship and rivalries, redefining the idea of family values and relationships. I like the way that inventors are presented as lateral thinkers as well as pure scientists, proving that no discipline exists as a standalone - contrary to the way some modern educators think as they try to isolate different areas of expertise. And even more interesting is the philosophical debate on what it actually means to be human rather than robotic. Dev's whole being is bound up with his status as a "fake with a personality".

Mr 12 commented that his favourite aspect of the book was the way that each of the young people works through his or her quirks and rises to each challenge. Dev is afraid of heights but he admits it and carries on anyway. Lot is often too quick to react and has to pull back so she does not get into too much trouble. And Mason just likes his comforts. All of these aspects made the trio seem more approachable to Mr 12. His observation was that characters in some books can be too perfect, and that is not real life at all.

He and I are both looking forward to the release of the third book in the series (because there just has to be one in the wings!) I have promised that we will do our tag team act again so we can present a united adult and almost-teenager perspective. Neither of us can wait!

Score: 8.0
Product reviews for listing 2628: A Crack In The Sky
Written by: Kyle Mewburn

Conor's day doesn't start well. His right arm seems to be missing, and he appears to have grown horns! Then his Mum tears her favourite skirt on a loose spring in the sofa.

It's obviously time to replace the sofa, but money is tight. So when Conor sees a red sofa bobbing in the tide, it seems like fate is working in his favour. But there's something very strange about this particular sofa...