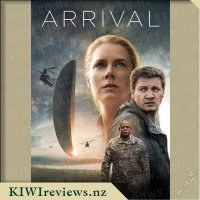 Disclosure StatementFULL DISCLOSURE: A number of units of this product have, at some time, been supplied to KIWIreviews by the company for the purposes of unbiased, independent reviews. No fee was accepted by KIWIreviews or the reviewers themselves - these are genuine, unpaid consumer reviews.
Available:
February 22 2017

When mysterious spacecrafts touch down across the globe, an elite team - lead by expert linguist Louise Banks - is brought together to investigate. As mankind teeters on the verge of global war, Banks and the team race against time for answers - and to find them, she will take a chance that could threaten her life, and quite possibly humanity.

Arrival being classed as a drama, should give you an idea on the level of "hollywood" action that the viewers are likely to find. Watching the trailer, and with an idea of the plot, one would expect an aggressive movie with missiles and nuclear weapons, but we are provided an entirely different experience; a science fiction drama.

When you meet the protagonist, Louise Banks (played by Amy Adams), we discover that she is a linguist. A fact that provides the direction for the rest of the film away. Focusing the bulk of the proceedings on engaging in communication with this spacecraft. In reality, this is barely a sci-fi film. The movie just provides a new way to look at establishing a basis for translating an unknown language. This premise itself is interesting as we ourselves learned our language a long time ago. So long ago that we can often lose touch with how easy it is to misconstrue and misunderstand a word; a scenario that in this case could potentially lead to catastrophic consequences.

Visually, the film is stunning. Finally we get a sci-fi film that isn't all chrome, holograms, and high tech gizmos; we instead get some very ugly hazmat suits, a scissor lift, and a whiteboard and marker. A very grounding experience. Instead of clean, sterile environments everywhere, we get a dank almost well-like interior, in an area that is dark and gloomy, and puts you into a contemplative mood. You aren't distracted by the beauty of the environments, instead you are focused on the plot.

The casting worked well, and it was interesting to see these comic book characters (Jeremy Renner plays Hawkeye in the Marvel Cinematic Universe, and Amy Adams plays Lois Lane in the DC Extended Universe) interacting together, I almost fell I would have preferred more unknown actors/actresses. Jeremy Renner and Amy Adams (and Forest Whitaker) are names and faces that are very well known, so sometimes it does become difficult to uncouple them from their previous roles and to fully engage with them in the movie.

The pace of the film is quite slow in places, and did have me checking how much longer I had to watch a couple of times in the middle, but the beginning and end of the film are gripping to watch. One of the aspects of the film which is probably glossed over as you watch it, is the soundtrack by Jóhann Jóhannsson. With many sound effects created simply with layered piano and vocals, we are given an eerie musical playlist that works together with the film, providing room for the dialogue and other sound effects, but still accentuating the tension and emotions in the room. Brilliantly done.

Overall, a very unique stance on the sci-fi "first contact" film, and a refreshing change from the hollywood releases of late. A film that makes you stop and think; responding instead of reacting to an otherworldy situation. Is it believable? Well, in my honest opinion, if the situation were to arise in real life, I don't imagine the United States would be as restrained as they were in this film, but I could still empathise with the level-headed approach. A pretty accurate portrayal of the wide range of responses that we would come to expect, and something I would definitely look to watch again.

Lara Croft is the fiercely independent daughter of an eccentric adventurer who vanished years earlier. Hoping to solve the mystery of her father's disappearance, Croft embarks on a perilous journey to his last-known destination -- a fabled tomb on a mythical island that might be somewhere off the coast of Japan. The stakes couldn't be higher as Lara must rely on her sharp mind, blind faith and stubborn spirit to venture into the unknown.