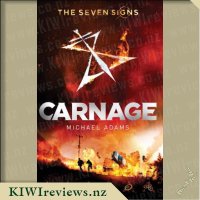 The DARE Award winners-Yasmin, Zander, Andy, Dylan, JJ, Isabel and Mila-have been caught in a deadly battle of wits with a mysterious enemy who isn't afraid to kill. Too late, they learned that the First Sign predicted catastrophic attacks which have lefy Egypt in chaos. yasmin is missing. Many more lives are at stake.

With Andy and Dylan in police custody in LA, can the remaining four DARE winners unravel the Second Sign-seven new symbols-and stop The Signmaker's destructive plan before the countdown ends?

If you could be a hero, would you DARE?

Seven Signs. Six days left to save the world.

I had looked forward to reading the sequel to Book 1 in this series, but it was somewhat of a muddled start. I read the first book nearly five months ago and, although I remembered the gist of the story, I found it was not enough to pick up the thread - in the end, I put Book 2 down and reread Book 1 first! I remember thinking at the time that it was a nuisance ending a book with a cliff-hanger and then having to wait several months before you could find out what happened. If a series is to be this closely linked, it might be better to have less time between publication dates. Instead of hooking me in, I find this system of rolling out annoying to the point that I might be put off buying the book at all, let along the series.

Having said that, I did enjoy the pace of the book once I had repositioned myself into the story. It is a fun, fast-moving adventure story which is a quick read (I finished it in just under an hour) and, although I admit to being a fast reader, I think anyone could read it in one go if they were into it and had the time. Again, the protagonists are unevenly presented with Yasmin, Dylan and Andy being the main players. The intricacies of the code they are expected to solve are further unpacked but not quite soon enough to avert another major incident.

I thought the inclusion of a strip of "tattoos" depicting some of the main symbols featured in the book was an interesting idea. There was no suggestion as to how or when they could be used but the idea adds a little fun to the book and presumably the young reader will come up with some innovative ways to use them. There are 14 different tattoos so enough for readers to share if they happen to be siblings and the book is given to a family rather than just one child. We have two sets of twins in my immediate circle - one family, the other close friends - so I am fully aware of the problems that can arise when children have to share!

I do like the blend of real technology and science fiction in the story, and also the gratuitous geography lesson at the start of each chapter: the inclusion of a world map outline each time with the whereabouts of the action designated with a pin means that the reader knows instantly where that particular chapter is set. The location is indicated immediately beneath the graphic. When the chapter involves a "HoloSpace link" instead of a physical location, there are no pins on the graphic; instead, the legend below the graphic refers to the areas that are linked online.

I look forward to finding out what happens in Book 3 - but this time around I was given Books 2 and 3 together for review purposes so the story will be fresh in my mind as I start the new instalment. I think this is going to make a big difference to my enjoyment level. Let's hope the rest of the series is available soon.

This is definitely is a book series that requires your full attention. While you are provided with a quick recap (practically a single page) at the beginning, it doesn't come close to covering all of the plot points of the previous installment. It serves more as a reminder of where the characters currently reside in the storyline, and you are expected to remember all of their backstories.

The book is very easy to read with a large quantity of small chapters. With seven protagonist and one antagonist, each chapter could come from either of the eight points of view (or a combination of, if multiple characters are together). With each chapter on average lasting only 2-3 pages, it both increases the rate at which people will read it, and makes it slightly harder to follow. With each chapter being so short, it is no difficult mission to read another chapter. Each one only requires a couple of minutes. Whereas a longer novel is more likely to take a more substantial amount of time to get to a "checkpoint" where you can safely stop reading without losing your place. The short chapters make it much easier to continue reading, but it also provides less time to acclimate to the new point of view. It almost comes across as a written version of shaky cam (things chop and change so fast that you can't fully appreciate what is going on).

Plot-wise however, the story keeps you drawn in. With the premise being very well set by the debut installment in the series, the story jumps straight back into it, resolving remaining mini arcs from the previous book while simultaneously moving forward with the major storyline (the positive side of multiple characters). I do love the use of symbols, as it provides the reader with something to do. Something to always think about, despite not all of the information being provided at the time. You continue reading hoping to figure out the answer before the protagonists do. One of the downsides however, is the constant need of every character to re-explain everything to everyone that they come across. It eventually starts getting very repetitive.

The story itself is rather exciting. With a global playing field and protagonists with nearly unlimited resources, the possibilities are boundless and allowing things to escalate. Descriptively, I feel the protagonists are rather poorly dealt with. I have a reasonable idea of who each one is, but I do often forget parts (such as who had the famous parents, who was a "goth", who had robot legs..), and they start to become "random character #1" etc., as their parts become interchangeable due to their character traits having no real effect on the story, despite their countries of origin (which I still struggle to keep track of too) helping with background knowledge to potentially solve riddles.

Definitely a good story, but very basic. Could do with less repetition, better depth of characters, and a little less repetitive so we can fit more story in per book.

The charmed combination of The Topp Twins and Jenny Cooper goes from strength to strength, This time bringing their talents to this well loved children's song about a scarecrow who loves to frolic in the night, when everyone else is sleeping.