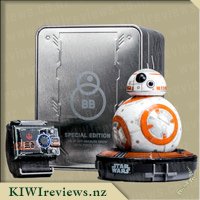 The Force is strong with you. Channel it with the Star Wars Force Band by Sphero. Like a Jedi Knight, you can control your BB-8 App-Enabled Droid with just a wave of your hand and expand your abilities with Force Training. Use the band by itself to complete Combat Training for Blasters, Lightsabers, and the Force itself, or collect digital holocrons in your environment through Force Awareness. Fulfill your destiny and become strong in the ways of the Force.

Pair your Force Band with Special Edition Battle-Worn BB-8, straight from the sands of Jakku. This Astromech Droid reflects the wear and tear of trekking across the galaxy on Resistance missions. Watch your Droid explore autonomously, guide BB-8 yourself, or create and view holographic recordings.

The Force Band is also compatible with the original BB-8 App-Enabled Droid by Sphero and Sphero robots powered by Bluetooth SMART.

BB-8 Features:
•  Authentic Movement - Guide your BB-8 with a smartphone or tablet
•  Holographic Communication - Record and view virtual holographic videos with BB-8
•  Autonomous Behaviour - BB-8 has a mind of its own - explore the Star Wars galaxy together
•  Droid Control Mode - Use the Force to push, pull and control BB-8
•  Combat Training Mode - Use your imagination to wield a lightsaber* or battle with a blaster*
•  Force Training Mode - Follow commands from BB-8 to master Jedi Knight abilities
•  Force Awareness Mode - Uncover digital holocrons in your environment and collect them in the app
•  Robot Control Mode - Use the Force Band to drive other Sphero robots powered by Bluetooth Smart

I have got to say, this is by far one of the most fun little RC toys I have played with in ages. While it does have a few slight niggles, they are tiny at best, and don't really detract from the fun you'll have with this kit.

Apart from the obvious fun of running this little droid all over the place, you can set it to roam and just like those little robotic vacuum cleaners, it will do a 'drunkards walk' and map out its surroundings. I set it going in my lounge - which is hardly cluttered with stuff - one afternoon and sealed it in by placing a low barrier across the entrance so that I could still step in and out easily, but the droid was contained. At the start, it was roaming around and bumping into everything and sundry, with suitable "droid bleeps" coming from the app on my phone. I let it roam freely overnight and by the morning it wasn't bumping into anything any more, instead stopping or turning away before it made impact. Very cool, and forgive my slight foray into the Dark Side, but it was hilarious watching it when I moved it into another, unfamiliar, room and let it loose. I would almost state it was swearing at me in droid.

Want to do away with the phone-in-hand or repurpose it for other tasks but still take manual control? That's what the Force Band is for. Using a range of sensors, the band can easily and intuitively control the droid's movements and speed. The quick tutorial you run through on your phone will soon have you waving your arm/s around like a Master Jedi, and the little droid will obey. Be sure to keep it calibrated though, because even slight irregularities in the surface will throw off it's gyros a little. After a while, these tiny glitches add up to the droid receiving commands that are a few degrees off, and it runs away from you.

If you need to pop BB-8 aside to recharge, but still want to have some more Jedi fun, switch to the Force Awareness mode and locate virtual Holocrons. For this to work, you really need to have your phone app open, since that is where they will be stored and activated. Find Holocrons containing info about characters and places in the Star Wars universe, as well as ships and weapons which will load sound effects into your Force Band. Waving, swooping, stabbing or making shooting gestures with your arm will trigger various sound effects, giving you a lot of fun with friends.

So, what are the niggles? Probably the biggest one is that the BB-8 unit itself has no sound output built in, so all the sound effects - impact noises, droid talk, etc - come from your Force Band or phone rather than the droid itself. As I said, a tiny thing at the most, but it does still steal a tiny but of the joy from it all because of the 'dislocation' between action and noise effect. Maybe a future version will have a sound chip and speaker installed in the chassis - but I won't hold my breath for it.

Overall, a great toy and the perfect gift for any Star Wars fan. This Limited Edition pack combining the battle-worn decals and the Force Band really is a steal!

Hasbro's new generation FURBY has been created by robotics experts from toy laboratories in America and children from New Zealand's own Kiokio Primary School in Otorohonga.

From America, the plush interactive toy has the latest EMOTO-TRONICS technology - a combination of advanced robotic technology, puppetry and realistic life-like ... more...