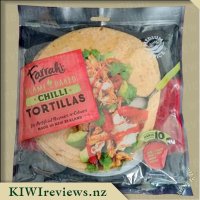 Farrah's Chilli Tortillas are the first chilli-flavoured flour tortillas on the NZ market. Made with chipotle and red jalapeno chillies, they have the perfect touch of heat.

The golden toast marks are the result of traditional baking, over an open flame, just like the Aztecs did in Mexico all those years ago. Our Chilli Tortillas are light and fluffy with flavour you can really taste and softness you can feel. Perfect for bringing any Mexican recipe to life.

I've come to love the Farrahs range of wraps, I did try other brands but eventually gave up on them deciding that spending and extra dollar or two for something that will stand the test of the various foods we eat so much better. I requested these because I was game to try something with a bit of heat to it, it's not my usual thing to go for but I have been expanding my tastebuds so that there might be more foods for me to enjoy and eat when here, there and everywhere.


The first thing I noticed was that this packet could not reseal, which is something I really like to have (the kids wraps are the same size so I'm not sure why they can be resealed but these can't) but I had an old packet from the kids left over so I popped them in that. I got a whiff of the spice right from the start and so thought it was pretty certain that I would get some heat when eating. My first try was making a pizza and these wraps added a tinge of heat to the meal. We then had some wrap bowls for dinner and I made a nacho mix to go inside, these wraps were perfect for this.


I gave my kids a small taste of mine but they all agreed that it was too spicy for them so I just used this for myself, though my mum joined us for dinner so I used one for hers as well as mine. We both put a tad too much rice, vegetables and falafel and we were a little worried about the wrap breaking simply because there was so much there but as this brand keeps proving, we needn't have worried and the wrap held. My mum agreed that the heat from the wraps made a nice addition to the dish.


My kids won't want this, but it means more for me, only down side is the lack of a resealable packaged.

Ok, let's start with where I was at using wraps - they were attempted for hubby and wife lunches and all the brands we tried cracked, crackled and were a disaster. So that was abandoned as a lunch option and we kept to our tortillas for Mexican dinners at home.

Low and behold Farrah's wraps arrived and were placed in our supermarket by the Mexican delights.....so I attempted them for a Mexican wrap night. WELL What a delightful surprise!! They were large enough to have only one for dinner (filled with chicken, salad, salsa, sour cream and jalapenos) AND they didn't break, crack, crumble or disintegrate while we were making them/eating them. WOW what a winner! They did NOT need to be heated in a pan or in the microwave and tasted delish!

So, the taste is a perfect balance of just quite right spice with the added chilli and jalapeno's that I love to add. The texture is also perfect, they can be heated, wrapped, rolled and made into an awesome dinner/lunch/packed lunch/picnic delight. My children love them filled with marmite and cheese, so not too spicy that the little ones may not love them.

Packaging - I love it, easy to seal and they really do keep fresh for a long time without double bagging them. They travel well - came camping and were enjoyed. An easy option to have in the pantry for children's and adult lunches or a quick easy dinner to be filled with salad and meat.

I trust this brand, I trust their products and this is a regular on my shopping list!!

Since trying Farrah's wraps through KIWIreviews a while ago I have never brought another brand. When I discovered that Farrah's had a new Mexican range and Chilli Tortillas I was very keen to give them a try. Mexican and anything with a bit of spice is a hit in my household.

As soon as I received the tortilla's I had to give them a try so I changed what I had planned for dinner that night and had chicken wraps instead. I cooked up some crumbed chicken, then threw it in the wraps with some salad, sweet chilli sauce and sour cream. I will admit I may of put just a little too much filling in but the wrap still rolled up perfectly with no cracking or spilling out. From first bite I was sold the chilli flavour was perfect enough so you could taste it but not too strong it over powered the rest of the dish.

The next day I decided to use up the leftovers with some dip, I cut up the wraps threw them in the oven to crunch up a bit. Once they were cool we used them to tuck into some dip. Once again it was perfect, right hint of spice without overpowering the other flavours.

I think it's safe to say I have a new favourite wrap as I have already been out to buy them again. These are perfect for anything, I have used them to make salad bowls, wraps for lunch and even as crispy pizza bases. I love the extra hint of flavour the wraps provide to every meal. This product certainly piqued my curiosity as I love chilli. If I am sweating, in pain, or hiccuping uncontrollably, then there is no doubt that I will be impressed with the product. So I definitely have a lot of experience with chilli and chilli-related products. I have noticed that with a lot of the Farrah's range, they have a wide variety of names and ingredients, but often I can't taste a difference in them. Their garlic butter was discernible, but still rather subtle in flavour. So I really wanted to know whether they could churn out a wrap that had a good amount of taste.

Aesthetically, you can see that there is something different about this wrap. The entire thing has a red tinge to it, with smaller chunks visible to the naked eye, which is always a good start. Visible ingredients usually mean a higher probability of being able to taste it. Being me, I just picked up a wrap and took a bite. Lo and behold I could taste the chilli! It was a reasonably vivid flavour, but not too overpowering or too subtle. It provided just a smidgen of warmth to the palate.

I had a wrap cold, and added a filling comprised of what remained in my pantry and fridge. A mixture of chicken breast, four bean mix, and a generous dash of Farrah's Nacho Spice mix. Simple meal that took me a grand total of 5 minutes to prepare and cook. It easily fitted into the wrap, and even without heating the wrap, it folded easily without tearing or cracking. Definitely a flavour of wrap that I enjoy. It doesn't have the blandness that I have come to expect from wraps, so it's not just a product for holding the flavour bits in the middle, it is also a contributor to the flavour itself.

As with the snack-sized tortilla taco variety, this product also doesn't come with the resealable packaging that the the original range comes with, so be sure to either eat it all within a couple of days or get yourself something to seal the bad with. I was a little dubious about trying this product as I thought the heat of the chipotle and chilli might overwhelm the filling. What a silly mistake - the combination was perfect, neither too plain nor too spicy, but just right. The heat was definitely there but it was not too strong. Three of us shared the pack and found that two apiece was perfect; that meant there was some left over for another day. That made them quite economical as they worked out at under 60 cents each, a lot cheaper than fancy bread rolls and certainly a healthier option.

The texture was soft and quite sticky which meant that the filling stayed put. We warmed each wrap before serving, chose our own filling from the selection we had prepared earlier, and then rolled up our wraps. The spiced filling was quite moist as we had added Greek yoghurt to cool it down, but not one drop ran out - it was contained inside the wrap. In fact the entire filling held together really well and there was still some left when I reached the last mouthful of mine.

Having tried our first wrap with the cold filling selection, we then added a hot filling to our second just to see how the contrasting methods would work. The second filling comprised beef mince, canned chilli beans, onions and spices, all cooked together over a slow heat and then mixed with grated cheese and served with a green salad. The taste was quite different, but we could not decide which we preferred. Each was as tasty as the other; they would be suitable for many different occasions, and would be equally satisfying whether served hot or cold.

Next day, I used one of the remaining wraps to make my lunch. The filling was simple - a chopped hard-boiled egg, some cooked asparagus, and half a tomato with a little mayonnaise to moisten. The heat of the tortilla gave it a slight kick but not enough to be overwhelming, and with a long black (my favourite beverage) it was just the right amount for a light meal. I have tried other wraps in the Farrah's range, but this one is going to take its place among my very favourites.