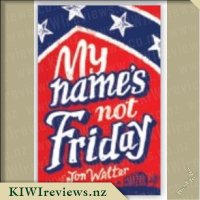 My Name's Not Friday product reviews

When Samuel, a free black orphan, speaks up for his unfairly accused younger brother, his life is turned upside down. Taken away from the only family he has, Samuel, now christened Friday, must make sense of his life as a new slave. Working at a ranch as a corn picker, becoming involved in the terrible fighting, and living among strangers. Samuel is determined to find his younger brother, and despite enduring horrors during his journey, he faces adversity with courage and optimism while still retaining his character and dignity as a boy. An epic novel set in the 19th century, which spans a nation, and reflects myriad ideas for young adults and adults alike.

I was excited to receive a book to read and review which was for adults not for my kids for a change. This book called My Names not Friday by Jon Walter looked interesting from the get go. The front cover is super bright and eye catching and definitely created to enforce the civil war period. The cover also includes fave reviews from popular American newspapers and magazines like the Guardian and the Independant on the cover which made me quite excited to read it.

This book is about a black orphaned boy called Samuel who is living during the times of the American Civil War where slavery was prevalent. He takes the blame for something his brother committed and his life turns into chaos where he's sent to a corn farm to work as a slave. The book follows him through adulthood and the challenges he has to go through being on the corn farm and for the search of his younger brother.

The book consists of 25 chapters and 361 pages and keeps you gripped from the get go. I would recommend is book to young adult and adult readers and those who have a special interest in books based in the civil war period.

I've been reading My Name's Not Friday recently. I was drawn to the book mainly because of it's striking cover. The cover art is really bight, and focused on the title. I opened the book and read the first page. When I felt compelled to turn the page, and read on I knew that the book had me.

I took it to work with me and I read it during breaks. I found that I was dragging my feet to come back to my desk every time I opened it up. The story was so captivating. In the end I had to take it home and finish it, because it was distracting me at work. I would sit at my desk and be doing some spreadsheet work and then suddenly I would start to think "what if"s about Samuel and his brother, and the slaves at the Plantation.

What happens to Samuel is terrible. There is a very strong good vs bad theme drawn between the two brothers. I'm not sure that Joshua (the brother) is bad, and it was hard as a parent to see the treatment of the orphans. It's a time period where corporal punishment is in force, and slavery is the norm in the Southern states of America.

I often felt sick about some of the things the characters had to go through. The unfairness of being sold into slavery. The treatment of a whole race of people, being no better than livestock. The fact that a slave family, can be broken up without any thought for the parents or siblings. Not even being allowed to read or to learn shocked me too. But I'm sitting in a privileged time.

This was not the first book I have read set in this historical time period. But it was the most modernly written. For this reason it was more accessible than Uncle Tom's Cabin or Huckleberry Finn. There are heavy themes around God and Christianity, religion and spiritualism. This was fine with me, but it might be a bit much if you don't tend to expose yourself to those messages. The thing is, the book is set in the 1860s and church and religion is important to the characters.

This book would suit an advanced reader, and I would recommend it to teenagers. It would be a great read for anyone who likes historical novels. Anyone who is interested in learning more about the American Civil War, and some of the history of slavery in America too.

The Emperor has won almost every horse race in the kingdom... All except one.

When two brillaint international trainers claim to have found the fastest racehorse for the Emperor, it sounds like his wish will finally come true! But is it the perfect horse?

A wonderfully witty take on the classic tale of The Emperor's New Clothes.