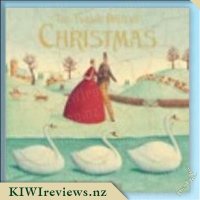 One Christmas Eve a man buys presents for the woman he loves, beginning with a partridge in a pear tree. The couple travel through town and gifts pile up, until they get to a Christmas party so magnificent it is a little overwhelming leading them to slip back to the quiet of home, where the partridge is waiting. This visual feast from acclaimed illustrator Alison Jay is the perfect festive gift.

On the first day of Christmas KIWIreviews gave to me, a beautifully illustrated book!

I've had my eye on this ever since it first showed up on the shelf at the bookshop my mum works in, even she agreed that it was a book she'd looked at. This isn't a new story, it's an old classic, so I won't bother talking about the story, though I will state that I love the font that was used in the book but my eldest did struggle with the font a bit to begin with and still is a little, but he is getting there.

I love the antique, cracked look on these pages, it real adds an old feel to it and helps show it as more of a classic. My first read through I didn't see too much, plus I was busy singing to the kids, but another, much closer inspection gave me three new things to show the kids. The first was that there were items from the previous days on the new page, not every single one but fun to spot which were in the new picture. The second was that there was at least one of the next days item on the page, ie on the ninth day you can also find something relating to the drummers. And the third... I could tell my kids to look for Santa on every page.

Lovely illustrations and I love the extra things throughout the book, great job with this book.

Growing up this song was a traditional favourite. It was sang at school, at home and any time you felt a bit festive as Christmas rolled around. It's a long song, and it requires you to have a good memory. It is also a counting game, that goes all the way up to twelve. With my kids, they haven't heard this song as much because now there are heaps of different versions including kiwi ones.

I sat down with Miss four and showed her this book, she was a little unsure of it at first. She didn't recognise what the book was about from the illustration on the front. I showed her some of the animals and asked her what else she could see. The title of the book is embossed in gold, which looks really elegant. The illustrations are crackled or crazed like old ceramics and that carries on throughout the book. She relaxed into it, and we opened the book up.

I chose to sing the song as we flicked through the book. Reading it like a story didn't feel right. She bopped along to the song, but didn't join in. I think that is because it was unfamiliar. She liked the gold rings the best and she selected two that she wanted for Christmas.

Next up I sang the song to my eldest who is nine. She loved all the birds in the story, but was confused when the gifts were people. She thought the illustrations were neat. She said it looks quite different to other picture books, because of the style of the drawings and how they look antique. The characters in the book, look like they are from the Victorian era.

This would be a lovely new Christmas book for your kids. It would also be a cool Christmas present. I can imagine putting this into a Christmas Eve box too. The type of gift you give on Christmas Eve that has PJs, a Christmas movie, reindeer food, snacks and a bedtime book. This book would totally work for something like that. It has a real keepsake quality to it.

Deltora is a land of monsters and magic...

The evil Shadow Lord has been banished, but famine still stalks Deltora, and only monster thrive. As the starving people weaken, Lief, Barda and Jasmine discover a terrible secret. The Enemy left the seeds of death behind him. Four vile creations of sorcery called the Four Sisters are hidden in the land. They are slowly killing it while the Shadow Lord gloats, awaiting his triumphant ... more...