ProdID: 7320 - Rose in the Blitz
Written by: Rebecca Stevens 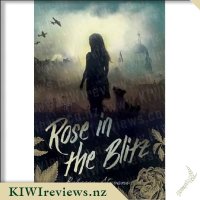 Rose in the Blitz product reviews

It's the night before Rose's mum re-marries. Rose can't sleep for worrying and nor can her muddled Great-Aunt Cosy, her namesake. Rose sees the old lady leaving the house and runs after her to the London underground. Their empty train stops in 1940, in a war-torn London broken by the Blitz.

Here, Rose witnesses great romance and impending sacrifice. Tragedy will surely follow-unless she can change what happens next...

I was really intrigued when I received this book to read and review, the cover really caught my attention with the little girl, her dog and the war planes featuring on it. I read the blog on the back and found it was based in London at the time of the second world war. A little girl called Rose and her dog Tommy follow her old Aunt Cosy into the night and end up on a train which takes them on a trip of her Aunts memories of living in London during World War Two. Her Aunt is starting to suffer from dementia and is worried her memories will disappear so she takes her granddaughter on a trip down memory lane of her living through what they call the Blitz and her trying to track down her long lost lover who was the one who got away.

I personally haven't travelled to London or read much history of the Second World War but the author Rebecca Stevens storytelling is very vivid allowing me to visualise the places they are travelling to and the scenes around them. The book is only 156 pages long and is very easy to read you could easily get caught up and read it all in one sitting.

I would recommend this book to anyone who is drawn in my the cover I'm not sure if I would pay full price but being a Scholastic book you do know you are getting good value for money.

This is a stunning book. It grabbed my attention straight away because of the reference to the London tube stations that were closed down after the 1939-1945 war, effectively becoming "ghost stations". My grandmother lived in London so I went to visit her when I was young, and I remember the stories she told me after I had seen one of these ghost stations on a trip on the Piccadilly line between Wood Green and Knightsbridge. The inside of the carriage was lit up and most of the time you could see dim circuitry and pipes through the windows on both sides - the walls appearing to be alarmingly close. I remember the train slowing down between Caledonian Road and King's Cross stations and realising that the wall on the outside of one of the windows had suddenly retreated, and there was a large empty space there. Later, my grandmother told me there used to be another station there called York Road. And that this was just one of many abandoned stations, damaged too much to be repaired after the war.

So I could empathise with Rose's experiences as she stepped off the train and into a station that no longer existed, crossing the barriers of time to enter into the world of Aunt Cosy's youth. (Aunt Cosy was not really Rose's aunt but that was the easiest way to refer to someone who was really her great-grandmother's cousin.) Yes, this is indeed a ghost story, and one that is charmingly written and almost believable. It explores the similarities as well as the differences between two members of a family born two generations apart, and celebrates the joy of first love and loyalty despite the barriers of war, racism, and family dynamics.

The characters are true to the times they live in. The character of Rose is portrayed as a modern teenager preparing for her mother's wedding, and her difficulty in adjusting to the idea that her father is going to be replaced. Any teenager who has been through the experience of gaining a step-parent, and sometimes an extra step-sibling or two, will relate to what she is going through. Rose is used to living in modern times in a multi-ethnic environment; she is technologically adept and has several close friends, both local and online.

Aunt Cosy is elderly; she still lives in the past and is much more familiar with the London of the 1940s than with the present-day city. When she is back in her own teen years, she is quite rebellious and appears much feistier than Rose, calling her Strange Girl and singing constantly to keep her spirits up. The friendship between the two girls is delightfully drawn, spanning the generations and helping Rose to learn a valuable lesson about love and acceptance.

I have to admit to reading this book in one session. It is well written; the story is compelling and it is very easy to believe that the impossible has somehow become real. Despite the sad theme of the devastation and personal loss caused by war, there is also a message of hope for the future and the possibility of good coming out of misfortune.

Ella's arrived at school camp and she can't wait for the FUN to begin! But then she discovers there are spooky noises outside every night, hair-raising camp activities to do, PLUS she has to share a cabin with scheming Peach Parker. How will Ella manage to avoid Peach's pranks AND the petrifying Giant Swing for a WHOLE week? This is going to be the worst camp EVER! Tom Gates meets Dork Diaries for young girls.