ProdID: 73 - Grabbed by the Ghoulies
Developed by Rush and Microsoft Game Studios 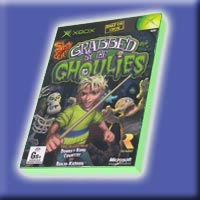 Disclosure StatementFULL DISCLOSURE: A number of units of this product have, at some time, been supplied to KIWIreviews by the company for the purposes of unbiased, independent reviews. No fee was accepted by KIWIreviews or the reviewers themselves - these are genuine, unpaid consumer reviews.
Available:
21st November 2003

Grabbed by the Ghoulies product reviews

LAUGH IN THE FACE OF DANGER
Straying too far from your homelands, you stumble across Ghoul Haven Hall, a huge mansion chock full of freaky, funny ghoulies. You'll have to beat tons of ghoulies to make your escape, so use whatever you can find to bash, smash, crash and give the dirty-fightin' ghoulies what they deserve. Douse fire imps with fire extinguishers, toss furniture at boxing skeletons, even beat up a zombie with his own arm - everything's fair game. Nothing here is what it seems.

A Monstrous Mansion
50 rooms covering 100 levels full of mystery, adventure and surprises lurking around every corner.

Hidden Depths Destroy the house to find tons of power-ups and bash your way into 20 secret bonus mini-games.

b>Smash Your Foes... with burgers, bottles and exploding soda pop cans... along with over 100 other destructible weapons.

Firstly, the niggles that sorta get to ya early in the game... get this bit out of the way fast.

- The cinematics at the start are long, and un-skippable. Even on restarts! Big mistake guys, but a technical goodie, so worth watching at least once.
- The bewteen-scene cinematics are VERY informative to the novice player, so again, though unskippable, are relatively important, short, and not too annoying.
- Unless in combat, your character is constantly running, even when nose-deep in a wall or obstacle.
- Clipping errors! Come ON guys 'n' gals, in this day and age, on this level of console, and you can't even Z-buffer correctly! Even The Sims does a better job. Shame on you.
- You can't carry temporary weapons between rooms, only permanent ones, which are short-term at best. The gifters take 'em back as you leave the area.

Other than that, on to the good points!
- The therapy value is great! Kill a Ghoulie until it's health meter flashes red 0, then walk up before it dissolves (a nice way to keep the floor clean team, good one!) and continue to attack it. Even though it's dead, until the red heart vanishes, you can stand there as long as you like and hammer the nasty little vermin.
- Even if you fail a Time Challenge and the Grim Reaper appears, if you are smart, and fast, you CAN outrun him, or get around him, and escape before you get Fainted.
-There is a relatively smart auto-camera coded, so you USUALLY get a clear view of what's where. An automatic First Person Perspective would be good in your next game folks! But the Auto-Recenter feature is quite usable, and the camera controls are really very well thought out. Manual control of the field of view is easy, instinctive after a few plays, and is hinted at throughout, at key points.
- The hidden stuff is really good when you find it, like Power Ups, Challenge Books, Weapons, etc.

Some Hints:
- Try to smash EVERYTHING. There is LOTS of hidden useful stuff hidden in almost anything. Pictures, boxes, vases, such a variety! But beware: Some objects contain Scares, Ghoulies and Power Downs. OUCH!
- Learn the attack controls first. The rest will come in time. LISTEN TO THE BUTLER!
- Time your battles. If surrounded, do lots of little attacks to stun them, then follow up with killfests. Don't try to pick them off one by one, you'll get clobbered from behind every time.

Right, now the quick summary:
- The graphics are a bit low-res, but there are a LOT of polygons to deal with, and many are highly interactive, so processing time would have to be allocated very strictly. Considering the level of detail, the cartoon cell-shading method was very apt, and this has been taken through the whole feel of the game, with cartoon-page inter-scene transitions, which allow for some good storyline elements to be introduced.
- The dialog is all 'Silent Movie' style, allowing for easy language customisation at development stage, and possible plug-in style language kits at a later date.
- Your skills progress rapidly with the highly intuitive interface, so expect the challenges and gameplay to grow harder to deal with proportionately. Watch out for the Grim Reaper challenges, as they can be REALLY annoying. And the Hunchback requires things to be thrown at his face. He'll turn his back on you if you get too close and is unharmed by repeated abuse to that side of him. Run back, grab a barrel and when he turns to face you and taunt you, hurl it hard! Hehehehehe. And Green lights are BAD!

Hema's World 1000 piece jigsaw puzzle now contains a Pacific Centred World Political map. The map of the World is clear and easy to read. It will make a perfect souvenir or gift. Includes flags of the World.