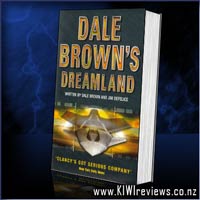 Where the best of the best take to the skies...

Hidden in the Nevada desert is America's most advanced aerospace-weapons testing facility. Dreamland is the place where the nation's top minds come to develop artillery and aircraft that push beyond the cutting edge. And where the Air Force's top guns come to test them - on the front lines of a new era in warfare...

But the fiasco of a spy's infiltration has the Pentagon looking for an excuse to close down the expensive research center. To clean up the mess, Lt. Colonel 'Dog' Bastian is sent in. He's just the guy to shake things up... and he does when a crisis erupts in Somalia. Into a hotter-than-hot war zone he sends his own daughter - the pilot of a Megafortess bomber - and a high-tech, unmanned flight system that could make or break the future of Dreamland...

Grevity smashed against his head so hard he nearly eased off the stick. That would have been fatal - the butt of Major Jeff "Zen" Stockard's Strike Eagle was dancing across the boresight of a pursuing fighter at optimum cannon range. Stockard's only hope was to yank and bank away, zigging and zagging in a wild twist across the desert sky, pulling between six and seven g's as he tried to escape. He tightened his fingers around the control stick and hung on...

WOW!
I had heard wonders about this series before I read the books myself. I had heard snippets of the other books in the series (Dale Brown's Dreamland) and just couldn't wait to (metaphorically) get my teeth into them.
They had just been delivered and I forgot completely about the book I was reading at the time and just got straight into this one, the first book in a series which currently has six other titles, and have barely been able to put it down, including reading it while travelling to and from school.

This book hooked me from the first paragraph to the end of the final mission in the book. A little unrealistic, but hey, right up my alley.
This book twists and turns, taking the reader on a geographical flight of fancy, from San Francisco to Israel.

I think this series has serious potential, and you should keep checking KIWIreviews over the next few weeks for my reviews on the rest of the series. Roughly translated: I'm going to have quite a few late nights and early mornings until I have finished this series. I highly recommend it to those who like reading a military fiction, similar to those of Tom Clancy and Matthew Reilly, two of my other favourite authors. You're going to love this book if you like Tom Clancy's style of work.

Based on the Marvel comic book series The Invincible Iron Man.

Adapted by Rich Thomas for the Marvel, An Origin Story series.