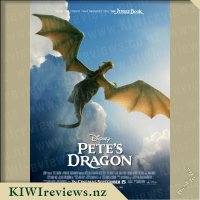 Disclosure StatementFULL DISCLOSURE: A number of units of this product have, at some time, been supplied to KIWIreviews by the company for the purposes of unbiased, independent reviews. No fee was accepted by KIWIreviews or the reviewers themselves - these are genuine, unpaid consumer reviews.
Available:
In cinemas from September 15th

For years, Mr. Meacham has delighted children with tales of the fierce dragon that resides deep in the nearby woods. His daughter Grace thinks these stories are just tall tales... until she meets Pete, a mysterious boy who claims to live in the woods with a giant, green dragon named Elliott.

"There's magic in the woods, if you know where to look for it" and the magic is certainly found in this updated version of the classic Pete's Dragon.

I have never seen the original version of this movie and so went into this with no memories, no expectations and nothing to stop myself from comparing it to. I love movies that showcase our beautiful New Zealand, I love seeing our gorgeous scenery, so that, along with how stunning Elliott looked had me wanting to see this, my kids just wanted to see it because there was a big, huge dragon in it. Our reasons combined had us off to see this on the big screen and had all of us leaving having gone through a huge range of emotions and thoroughly entertained.

All the actors did a great job, some of them well seasoned and I've seen them plenty before and enjoyed watching them on screen, meanwhile the two main children, I have not seen before but they were fantastic in their roles and equally believable in their roles. The movies alternates with its pacing, going from fast to slow, heart wrenching to hilarious, and whilst there were a couple of moments seemed a tad too slow it still kept everyone's attention. The tale isn't anything new, even with it being a remake, there are still many a book or movie that follows along the track of gentle giant misunderstood and attacked, but of course Disney can employ the best and the story flows well.

The special effects were done wonderfully, what else have we come to expect from Weta? Elliott is stunning and he looks real, not only blending in prefectly and seamlessly when needed, but standing out beautifully against everything else when the situation requires it. Those who get to ride Elliott look like they really are and I love how puppy like he is. The only part I didn't find believable was the car crash scene at the beginning but I do understand that they needed to tone it down for the children in the audience.

My kids and I loved this film and cannot wait to see it again.

Visually this movie can not be faulted. New Zealand is show cased beautifully and the landscape looks incredible. The Dragon was so fantastically done and made me want to have my own Dragon all over again. Both of my girls fell in love with Elliott from his crazy crash landing to his dog like behaviour that once out of the cinema they both asked if we can go up the mountain and find him as they both wanted to cuddle, ride and keep him. The special effects were top notch - it was just so well done.

Like all Disney movies you have to have a bad dude and in this case it was Karl Urban which was really upsetting as I like him as an actor so it was very hard to hate him but surprisingly he made it easy. It made you hate man and the disgusting way he takes ownership over things that we do not understand. It was dark but yet there were laughs and it reminded me of Free Willy as they raced to get Elliott away. You want a happy ending but you know that hearts will be broken, which was evident by the amount of kids crying at the end of the movie.

The pace was random and you could tell when it slowed down as my girls would start eating pop-corn again and moving around and you could hear other children talking but then the pace would quicken and the room was dead silent, it definitely held your attention, but then it would slow down. The cast and acting were fantastic (besides Karl being the bad dude) although thankfully he does exonerate himself by the end.

I grew up with the cartoon version of Pete's Magic Dragon and while, this is nothing like that movie with no singing or lighthouse it is still a very good movie and reignites the magic that the woods hold. I think I prefer this version of Elliott as he looks like a big shaggy dog that you just want to sink your hands into just like Pete does. I truly hope that Dragons do exist as next weekend we are going looking for them. I just hope we can sneak up on one before it turns invisible. A great magical movie.

This movie looked like a nice friendly children's movie about a boy and his dragon friend so I decided to take my 3 year old son and 5 year old daughter. I wasn't aware at the time but I found out afterwards that it's a remake of a 1977 Disney classic, although the whole thing screamed of The Jungle Book to me.

The opening scene has a horrific car accident that left my daughter in tears and me wondering what type of movie I had brought them to. From there it got slightly better once Pete (played by Oakes Fegley) and Elliott, the dragon, find each other and live happily together for a number of years until loggers invade the area close to where they live and then chaos breaks out and the heart strings are tugged once again. My daughter was sobbing at one point where she thought Elliott was dead but it's OK there was a happy ending after all. Aside from the few sad moments, the movie is actually a very lovely film about family, love, magic and friendships with a touch of empathy thrown in for good measure.

My son sat with his eyes fixed to the screen for all the action parts but during the quieter moments he got a bit fidgety. Also we saw the 3D screening and he wasn't so keen to keep his glasses on the whole time so just watched it without. My daughter watched the whole movie but had to cuddle up to me during the scarier and sadder parts. Afterwards my son said he liked the movie but I honestly think he is a bit young to understand what was happening. My daughter said she liked it but it was a really sad movie. The fact that it made my daughter cry (and almost me) is actually a sign of a good movie to me, it show's that the watcher is invested and believes what is happening.

Weta Digital did an excellent job, as per usual, with the special effects and they made Elliott the dragon look so real and also cuddly at some points. He blended perfectly into the New Zealand forest surroundings and it was easily believable. My daughter loved how he acted more like a dog than a dragon and how he kept crash landing.

In hindsight, I think this movie was too advanced for my children and the best ages would be over 7 years but my daughter did enjoy it, it isn't one she would normally pick to watch on a DVD at home, but for a special outing to the movies it was fine.

Three years after the destruction of the Jurassic World theme park, Owen Grady and Claire Dearing return to the island of Isla Nublar to save the remaining dinosaurs from a volcano that's about to erupt. They soon encounter terrifying new breeds of gigantic dinosaurs, while uncovering a conspiracy that threatens the entire planet.