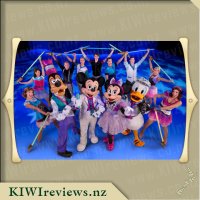 Disclosure StatementFULL DISCLOSURE: A number of units of this product have, at some time, been supplied to KIWIreviews by the company for the purposes of unbiased, independent reviews. No fee was accepted by KIWIreviews or the reviewers themselves - these are genuine, unpaid consumer reviews.
Available:
See website for tour details

Be whisked away into the wintery world of Disney's Frozen and join Elsa and Anna, Olaf, Kristoff and Sven in a story full of action, adventure, magic and unforgettable characters. Experience Disney's The Little Mermaid with a show-stopping performance by Sebastian and Ariel.

Get tangled up with the sassy and spirited Rapunzel and her charming ally Flynn from Disney's Tangled, and get swept away by Disney's Beauty and the Beast as the enchanted entourage take center stage in a spectacular show for Belle. It will be a magical mix of royalty when Disney On Ice brings this incredible wonderland to you!

I've seen the ads for Disney on Ice for the last couple of years but unable to afford it, this year we were so lucky to get four tickets to go and see this extravaganza.

The kids were inevitably drawn towards the merchandise outside the doors, but that was something we had to skip, if getting some is your wish then have plenty of spare money as it ain't cheap at all. Entering the seating areas, there's no denying it's a Disney event, the well known Mickey Mouse head adorning the back curtain. We had a brief entertainment from a couple of skaters at the start, twirling something in the air, wonderfully catching it and sending it spinning around, got the audience well into the mood and set the tone for the night.

It started off straight into the show, with a lovely reminder that it was a-ok for the kids (and adults) to sing along and dance in front of their seats. We had laughs from the start with Mickey, Minnie, Donald and Goofy and we enjoyed their intros to each act, enough info that we could guess who was to be on next but not giving names outright. We started off with The Little Mermaid, with Ariel sisters performing and right away the kids were into it, asking where Ariel was. There were a few jumps from sudden loud noises and brief fireworks, but nothing that scared them too much and all added well to the overall effect.

The Little Mermaid was followed by Tangled, Beauty and the Beast and Frozen. Each one gave us a very condensed walk through of the well known films, I did like that they used the original audio from each movie, so really enhanced that these were the stories coming to life on the ice. I noticed a couple of lines didn't seem 100% but either that was my memory not 100% or alternate dialogue that was used for this and it worked for the scenes because I can understand them not wanting to make Gaston or anyone else too scary when live and loud.

The one thing that all four of us agreed about not liking, was the volume of everything during the show, I do understand why its so loud, they need to ensure that everyone can hear, but that was our joint little gripe. I did find one part both stunning, visually, and then slightly irritating as it induced a small coughing fit for miss 7, and that was during the Frozen segment and their 'snow', and what little ẃe got Floating in our faces made me glad that we weren't any closer to the stage. My five year old said she loved the Frozen segment most, which isn't surprising as she's still Frozen mad, my seven year old screamed that she loved every part of it and wants to go again. My eight year old, who was the most quiet and subdued during the whole time, said that he loved it and wants to go again, tomorrow if he could.

While we may have been up high, we could still see everything perfectly and the costumes were simply stunning, I couldn't get enough of the fish costumes in The Little Mermaid, they were stunning and even far away, such details on the costumes meant that nothing was lost at all, those costumes were certainly my favourite of the night. The skating was beautiful and all were pros, I noticed a couple of times there was a slight stumble but these guys are such pros and didn't skip a beat getting back into the flow of things. Ariel did some amazing moves that had me dizzy and the folks operating Sven and Maximus, I can't imagine skating with my eyes open, let along one guy blind in the back of it.

This was such a great show, everyone did a great job and everything was so well geared at making the kids happy and comfortable. We had a blast and I think I may just have to save up to go again next year.

Score: 10.0
Product reviews for listing 2709: The Worst Week of My Life - The Complete Collection -  Type of Show: Comedy Series

Series One: The week before a wedding can be stressful at the best of times, but as Howard Steel prepares to marry Mel, it becomes a nightmare.

Series Two: Having finally made it down the aisle, it seems as if everything is finally going well for Howard. They are about to move into a new home, and are expecting their first child. If only life was this simple!

The Worst Christmas of my Life: Howard and Mel are looking ... more...