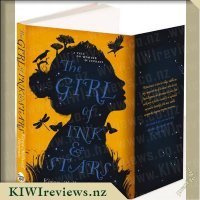 Forbidden to leave her island, Isabella dreams of the faraway lands her cartographer father once mapped. When her friend disappears, she volunteers to guide the search. The world beyond the walls is a monster-filled wasteland - and beneath the dry rivers and smoking mountains, a fire demon is stirring from its sleep. Soon, following her map, her heart and an ancient myth, Isabella discovers the true end of her journey: to save the island itself

A User's Guide to the Universe
Rating: 9.3

I do enjoy a good fantasy and am often able to look past a book cover, but not in this case, and not because it is a bad cover, completely and utterly the opposite, this cover is stunning and I would love to have it (minus the writing) as a poster for my wall, its gorgeous! This is further aided just within the back and front covers, where you can find both a map of Joya and the hidden map (which I won't give away any more of. The book is loosely separated into four parts, each with their own basic map, this coupled with the simple, but wonderfully done illustrations copied on all the pages, adds really well to not only the plot but the overall effect of the book.

Isabella is a well written lead character and I think is pretty much what I would want in a heroine. She gets scared, many a time and lets us know but she is able to stand strong in the face of such adversity and keep on going. She suffers loss (both before the events of the book and during) and doesn't let it define her but nor does she just brush it aside. What I was equally happy about was that there is no romance in this book, she travels with a male friend and he is just that, a friend, it's a refreshing change and may it long be kept up. The other characters are well written, even those barely given any paper time, and each felt integral to the book, none felt useless.

Now, the story itself... I'll start off by saying the it is very well paced, it gives a good introduction and build up towards what is to come and then moves along without giving much rest but that suits the book well. I like that the basis of this is built on mythology and exploration, it isn't a new idea and the themes are similar to other stories that I've read, but, there's enough newness to it, that it wasn't a problem at all. There were a couple of words that I had to work out a pronunciation for, but once I had, I liked them and one became a favourite throughout the tale, Tibicena.

I thoroughly enjoyed this book, I half hoped that it wouldn't end without a cliff-hanger and there would be a second book. As it stands, if Hargrave ever wanted to, it's open enough that there could be more tales involving Joya and the world its in.

This is a stunningly beautiful book. From the cover graphic to the choice of paper to the template style page decor to the twin before-and-after maps on the endpapers, this is a quality and painstakingly planned piece of art. And that is before you get to the story proper! Even if I did not want to read the text of the book, I would be sold on its appearance alone. The exotic fantasy world portrayed in the story is foreshadowed by the richness and detail of the graphics.

From the start of the text, the reader is drawn into a world of mythology and magic where the unusual and the unexpected are the norm and it is considered part of a day's work to conquer monsters, harness the power of healing through the application of water, and ride away on a quest even if you are but a child (and a female child at that!) The prime qualities of the hero/heroine are courage and commitment to a cause, and the preparedness to pursue the goal even if it results in injury or death.

In places I was strongly reminded of some of Jules Verne's fantasy writings, produced over a century ago. Although new technologies have developed beyond recognition and at breakneck speed in the course of that century, this story is set in a time period and geographical setting where electronic communications and associated modern developments are irrelevant, so the similarities are greater than could otherwise have been expected. The common themes - adventure, survival, collaboration, and the bonds of friendship - are equally vital to the plot development.

Good fairytales are hard to find these days when so much literature for young people is based around their everyday life (school, sport, young love, etc.); the wonders of technology; or the new Gothic tradition in the form of vampire and werewolf fiction. This story does not aim to be trendy: it is unashamedly an old-fashioned fantasy tale in the best traditions of that genre. On one level it is an adventure story; on another it is an epic which traces the struggle of a conquered people to restore their land and reclaim what is rightfully theirs.

Incidentally, Miss 16 offered to read it for me once I had finished it, and I took her up on this offer as I know she is a quick reader and her responses are usually really perceptive. But this time she returned it to me without saying anything at all. I pressed her for a reaction. Her answer: "Well, there is not much I CAN say. Maybe just that I could not put it down? Maybe just - just WOW?" I know what she meant. That just about sums up my own response as well!

Sophie and her friends, Marianne and Delphine, are surprised to win places on a school trip to Russia. But the trip does not go as expected. Abandoned on an express train heading out of St Petersburg, the girls are thrown out at a disused station, where they are rescued and taken to the beautiful but faded Volkonsky Winter Palace, as guests of the exotic Princess Anna Feodorovna Volkonskaya.

Guarded by white wolves, the princess is an ... more...