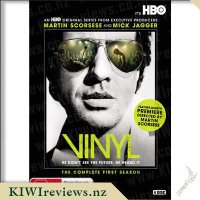 From Martin Scorsese and Mick Jagger comes Vinyl, a new drama series that explores the drug and sex fuelled music business of the 1970s. Richie Finestra (Bobby Canavale) is a major-label exec with a dark past and an even darker present. With his company, American Century Records, facing a number of client crises, and with his A&R team having trouble landing new acts, Richie, sober after years of drug and alcohol abuse, looks to sell his label to a West German firm.

But Richie's plans become complicated when he becomes embroiled in the death of a sleazy Long Island radio-company owner. Facing jail time, not to mention the loss of his disenchanted wife (Olivia Wilde) and their two kids, Richie ends up reverting to his old vices, but has an epiphany during a concert at a Greenwich Village theatre where the roof caves in on him. Literally. Series also stars Ray Romano, James Jagger, and Birgitte Hjort Sorensen.

Special Features include: Commentaries, inside the episodes, and Making Vinyl: Recreating the 70s. The premise of this show intrigued me; following the running of a record label in the 1970's. The fact that it was directed by Mick Jagger and Martin Scorsese certainly implies that the show will follow the "sex, drugs, and rock & roll" of the music industry. The series starts with a feature length premiere followed by nine other episodes bringing the total run time to nearly ten hours in total (not including special features). Just on run time alone, that is good quantity for money. But is the quality there?

The feature length premiere I will admit was a little bit confusing to me. While it set up a lot of the backstory, I didn't know any of these characters well enough yet, and as it was already set in the 1970's, I personally had a little bit of trouble figuring out what was occurring currently, and what was a flashback (The start of the episode, and the end are about 10 minutes apart from what I can tell, so it jumps around a lot).

Outside of that debut episode, the show runs like any show, with much more limited and easily distinguishable flashback moments. Take heed of the warnings and the rating of the DVD, as there is definitely a lot of nudity (both male and female), excessive drug and alcohol abuse, graphic violence, and offensive language. While that seems par for the course for television shows these days, I did feel that some of these aspects were unnecessary.

When I looked on the back of the DVD case and saw Olivia Wilde, I instantly had high hopes for the show, unfortunately she only plays a minor role in the series. On the other hand, Juno Temple plays Jamie Vine (who looks a lot like a younger Sarah Chalke) and is the stand out character from this debut season, doing an amazing job alongside James Jagger (son of Mick Jagger). I couldn't really take Ray Romano seriously, as every time I hear his voice I think I'm watching an episode of "Everybody Loves Raymond", which is made even weirder by co-star Bobby Canavale's subtle facial similarities to Brad Garrett (who plays Ray's brother in the "Everybody Loves Raymond").

Plot-wise, I was a little disappointed at how little we really got to see of the workings of a record label. It was strange to have a show that was based in and around a record label, with every character interacting with that label in one way or another, and yet the show didn't have the label as the focus. Everything revolved around Richie Finestra (Bobby Canavale), and I honestly did not really like his character, and struggled to empathise with him. But I did enjoy the music, and "recognising" the artists from the era before they get name dropped in the episode was a fun little game.

I don't see the plot as being engaging enough to have kept me watching week after week on television, but as a DVD set, it would certainly make for a great marathon. If the 70's music scene is your kind of thing, then you will certainly enjoy this show, especially the special features, which delve deeper into the making of the show, and the creation of the 70's look.

Score: 10.0
Product reviews for listing 2314: Earth - The Power of the Planet -  Type of Show: Documentary Series

This landmark five-part series uses specialist imaging and compelling narrative to tell the life story of our planet, how it works, and what makes it so special. Examining some of the great forces that shape the Earth - volcanoes, the ocean, the atmosphere and ice - this DVD explores their central roles in our planet's story revealing how these forces affect the Earth's landscape, its climate and its history.