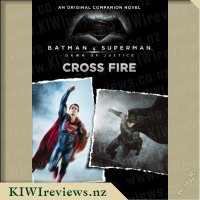 Batman and Superman are on the case! After saving Metropolis from an alien invasion, Superman is now a famous Super Hero around the world. Meanwhile Gotham City's own guardian, Batman, would rather fight crime from the shadows. But when the devious Doctor Aesop escapes from Arkham Asylum, the two very different heroes begin investigating the same case and a young boy is caught in the cross fire. Sharing books with a new generation is always exciting when the back story is one I was familiar with at their age. When I was young, my all-time favourite comics featured Superman. In joint second place were Donald Duck and Batman. These three characters have gone the distance, even though the old comic books have now reinvented themselves as graphic novels, and continue to delight children as much as they have always done. This book is a film "companion novel" about both Superman and Batman, so Mr Six and I settled for some quality reading time together, interspersed with essential background about Gotham City, Metropolis and Planet Krypton from me!

The book is recommended for ages seven and upwards. With occasional assistance, Mr Six was able to read most of it by himself, but I took a turn now and then to give him a break. There were a few unfamiliar words which we needed to talk about, like "exodus" and "ventilation", but most of the text was accessible to him with minimal help.

While we were reading, there were frequent tangents to be explored. Dr Aesop prompted a side reference to Aesop's fables (which Mr Six was familiar with) and a discussion as to whether it was his real name or just a name he had adopted because of his habit of illustrating points with short anecdotes. The idea of an alien invasion, and Superman being considered dangerous because he was an alien too, promoted more talking about the dangers of xenophobia. Mr Six goes to an ethnically diverse school and has been known to come home with a new song or counting game in Samoan or Cantonese, so he has quite strong opinions on that!

The story itself is really the tale of a 12-year-old boy who is trying to find his mother after the alien attack on Metropolis. Superman and Batman are both important to the plot for different reasons, and it is only with their help that Rory is able to help his mother, but their part in the story is not as high-profile as his. This is important because the young reader can empathise with Rory and admire Batman and Superman from his perspective. They are both defined in terms of their relationship to him in the aftermath of the invasion.

We both enjoyed the story. Although it is aimed at a young audience and is written as an account intended to be read in conjunction with the film, it is nicely paced and reads smoothly. The film is not especially suitable for younger children so that will have to wait until Mr Six is a little older, but in the meantime he is up to date with the characters and the storyline and can hold his own when it is the subject of discussion!

Lionwolf - son to both god and mortal, his destiny must be death or power everlasting.

Born into a world of eternal winter, where once thrived hot climates and exquisite luxury, Saphay, the daughter of a sub-King in the civilized west, is sent off to marry a leader of the barbaric Jafn... not realising that her own father has arranged for her adbuction on this perilous journey.

Escaping her pursuers only to be dragged into ... more...