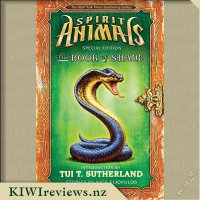 Friend and traitor. Conqueror and king. Hero and villain. Shane is just a boy, but in order to free his people, he's resolved to do whatever - to become whomever - his mission requires. Conor, Abeke, Meilin and Rollan are four young heroes racing to save the world of Erdas, and their journey has pit them against Shane again and again. But none have learned the truth of the boy who nearly changed the course of history forever.

Now that truth is revealed. With an introduction by Tui T. Sutherland, this collection of stories sheds a light on the past, present, and future of the boy who would be conqueror - and the role Shane has yet to play in the dangers still to come.

This is a book that demands more from the reader than most because it highlights the fact that nobody is pure good or pure evil. Often in children's books the characters are divided into two teams - Goodies vs Baddies, Cowboys vs Indians, Earthlings vs Aliens - and there is little incentive to take the "opposition"'s view into account. In this collection of stories, the reader is challenged to accept that Shane is a bit of both. This adds to his attraction as a character and makes for lots of interesting complications in the plot.

Whether villain or friend, Shane is a fascinating and very credible character. It is hard not to be drawn in to his adventures and understand his point of view as he faces each dilemma and deals with it in a unique way. His relationships with the other characters he encounters in his journey are all very different but all contribute to the sort of person he is. Most of the time he comes across as being quite sympathetic, but he has the ability to be ruthless when this is necessary.

Shane's first aim in every story is survival, whether personal or for the other people (friends or fellow countrymen) in his life. There are frequent reminders that he is actually the king, even if his behaviour and his experiences do not always match this role. Throughout each encounter he maintains his integrity and his desire to reach the best possible outcome under the circumstances.

I could not put this book down. It is very well crafted and suitable for an audience much wider than the target 8-12-year-olds. As an adult, I approached this book with an open mind (and with a view to recommending it to the children in my own family, or the children I teach) but I found myself completely absorbed in it from the very first page. It is not often that a collection of stories has so much cohesion that they can be read in conjunction with one another, but that is the case here - it reads more like a chapter book than separate works. I cannot recommend it highly enough.