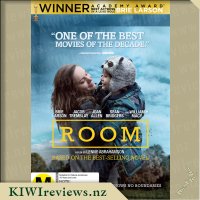 5 year old Jack and his "ma" have an unbreakable bond. Ma is devoted to nurturing and protecting Jack, no matter the cost. They are literally the world to each other - because, for the entirety of Jack's life, they have been locked away from the world, held captive by an evil man in a small windowless space, which Ma has named "Room".

As Jack's curiosity about what is outside their four walls grows, and Ma reaches her breaking point, they enact a risky plan to escape, ultimately bringing them face-to-face with what may turn out to be even scarier than the enemy within: the real world outside "Room".

This is a thriller that demands the viewer's undivided attention, especially during the first half when Jack and his mother are still confined in the shed that is their prison. The world is seen through Jack's eyes, presented as a miniature version of what is "real". From the opening sequence, where there are veiled glimpses of the things Jack sees in his prison, to the unfolding and exposing of Jack's confined universe, there is the gradual revelation of a restrictive and cramped living area. The impressions solidify as Jack's pathetic world is revealed - the life that has been led completely in prison, the strong bond between Ma (played by Brie Larson) and Jack, and the ever-present threat of their jailer who is also Jack's father.

The movie is effectively divided into two sections. Although the first section of the movie is very powerful, presenting the images of an abused woman and child and exposing the horror of their situation, I found it quite drawn out. This section of the movie lasts for 45 minutes, and, although there are lighter moments when Jack is playing or sharing his unique view of the universe through voiceovers, the overall impression is one of darkness. I found it slightly too long for sustained attention and would have liked to see it cut by several minutes.

After the escape, the second section of the film begins and it picks up in pace as it explores life for the pair after they have reached freedom. It was telling that Jack is still depicted as wearing diapers at an age when most children have outgrown them, a sign probably of his uneven rate of maturing since in other ways he is wise beyond his years. However, he still clings to his long hair as, like Samson in the bible story, he believes that his hair is what keeps him strong.

The pressures of adjusting to "normal" life back in the real world are sensitively explored. At the end of the movie, when Jack and his mother get to revisit "Room", the only name Jack ever had for his prison and home for the first five years of his life, there is a sense of closure - not only for them, but also for the audience. It is as though the act of exposing the shed for what it really is strips away the dark memories that have haunted them both and opened the way to acceptance of reality in the real world.

Jack's gradual acclimatisation to life in the real world and his acceptance of what is considered to be normal is made credible in large part by the outstanding performance of Jacob Tremblay, a young man who clearly has a bright future in acting. Although the film is dark in many ways and is sometimes difficult to watch, it does carry a message of hope that, despite the odds being stacked against someone, they can overcome difficulties and move forward if they just believe in themselves.

It was just another stop on the ultimate pleasure trip...until it became a dead end. When a group of tight-knit college friends visit the site of an undisturbed Mayan ruin, they stumble into an ancient trap. An unspoken evil waiting to drag its victims into an endless nightmare of fear and horror. Experience one of the most shocking thrillers of the year, with an ending so disturbing it will grab hold of you and never let go.