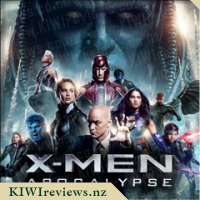 Since the dawn of civilization, he was worshipped as a god. Apocalypse, the first and most powerful mutant from Marvel's X-Men universe, amassed the powers of many other mutants, becoming immortal and invincible.

There's a line in the movie that sums this um beautifully... and I do have to wonder if the scriptwriters put it in deliberately, or if the actress concerned ad-libbed it... but it goes like this: "Everyone knows the third one is rubbish." The characters are talking about "Star Wars: Return of the Jedi" which the characters have just been to see. But as an audience member of this movie, I had to laugh because even by this stage of the movie I was feeling a bit underwhelmed.

The plot is basic, short and simple - Immortal baddie gets woken up and decides that, as the most powerful being on the planet for thousands of years, he has the right to reset civilisation and start it anew in the mould of his choosing. Humans are annoyances but should worship him, and mutants are his army to be. The rest of the movie is basically an all-out mutant slap-down with Magneto playing the starring role as "destroyer of the world." There's no spoilers there, because you see all that in the trailers... and spoilers require a plot that has twists and reveals, while this movie had basically none. It was, unfortunately, entirely predictable from the outset. The only TINY twist is how Apocalypse, aka En Saba Nur, as he refers to himself throughout the movie (Oddly, NO-ONE in the movie ever calls him Apocalypse!) triggers the amplification of Magneto's powers.

Would I go and see this again? Heck no. It's a waste of money, and I am grateful I won tickets to see it so that I didn't feel I needed to ask for a refund. It was, however, over 2 hours of my life I could have put to better use, doing almost anything other than sit in the theatre listening to everyone around me giving free running commentaries.

Overall, by far the least satisfying X-Men movie of the last 20 years. The special effects were second to none, but that's nothing out of the ordinary these days. I would have been happy with cardboard and tinfoil wings and a few neon tubes if there had been a story worth watching.

Clyde Shelton is an upstanding family man whose wife and daughter are brutally murdered during a home invasion. When the ... more...