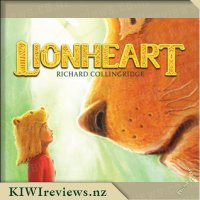 A little boy sits in his room hugging his favourite toy. But something is there and Richard is scared, so he runs .... through streets, fields, forests, over hills and into a magical jungle. Is there really anything there? And is he brave enough to face his fears? Find out in this exciting and uplifting adventure that will make you want to ROAR!

I was drawn to this book by its amazing cover which is illustrated with a young boy who's face shows fear when he comes face to face with a lion. I like the way that the whole lion is not shown so lets the reader come to their own conclusions as to what this book might be about. Is this lion going to help the young boy or be the problem? This book is in hardcover form with a dust jacket which you do not see very often with childen's books. This gave a good indication as to what age group this was written for.

Every child has a special toy, and this book came just at the right time when both my five year old and two year are having to live away from the comfort of their home and they bought with them a variety of toys to sleep with. Staying in new places can be daunting for any child and so this book helped cope with new noises and people both nice and scary (doctors) to them both.

The author has captured the reader through both the illustrations and text. Sentences are very short which lends itself to the impact of fear. Richard was running from his fears and comes across a magical place. A place we would all like to visit where he meet a very kind lion who made him forget his fears for a while ..... until the monster appeared again and Richard along with the other animals faced this monster and made it disappear.

This book is all about courage and facing those fears. My five year old had quite in-depth discussions in how it is okay to be scared and how we can overcome the fears he currently has. Some of those fears are about working together as a group where others are some he needs to overcome himself with a bit of help. He described his magical place which as a parent has helped me in the few nights he has woken scared. I can talk about his magical place to take his mind off what originally woke him. This is definitely going to be a well-loved booked that is visited numerous times in our home.

When your a parent, the time is sure to come where your child doesn't want to go to bed because they are scared of monsters. Having gone through this recently with my 3 year old, this book could not have reached me at a better time. This has become the perfect bedtime story which has been read almost every night since receiving it, and it seems to have put Miss 3's mind at ease in regards to her fear of monsters, with William, the main character of the story having a special lion hat he wears Miss 3 has now taken this on board also and insists on wearing her similar tiger hat to bed as in her mind this is how you scare monsters away.

Lionheart is a story about a little boy, Richard and his beloved toy Lionheart, who together go on an adventure in his dreams after Richard hears a sound, Richard knows theres no such thing as monsters, but isn't sure what the sound he hears could be. As Richard and Lionheart set off on a magical journey through streets, over hills and and through forests William learns to face his fears instead of running away from them, as he learns that running away is no answer. Instead he manages to seek courage from Lionheart who transforms from a toy to a life sized, breathing lion, who along with other animals that William has met throughout the story stand up together and ROAR which finally frightens the monster away.

The illustrations which are done in the most captivating way which looks to be done through paint are just amazing, right from on the very cover of the book. The most detailed animals and the perfect balance of light and darkness shown in the reflections the illustrator has done an amazing job. My boss was in awe of this commenting on how this is one of the most beautiful picture books she has ever seen and was wowing at each page she turned, Miss 3 and the children I teach at daycare were commenting on these constantly and were able to describe the feelings of the little boy Richard on each page purely by looking at these amazing images.

This book is so valuable in many ways as it is full of numerous important messages such as learning to face your fears, instead of running away from them and also to be courageous. The book made lengthy discussions with many of the children whom I work with as we discussed the world of make pretend and what to do if your feeling scared, we talked about all of the special toys we sleep with and how they make us feel safe and secure. It also gave us an opportunity to talk about feelings and that sometimes we may feel sad and scared and that this is ok. A truly amazing book and one that we will most probably end up purchasing for my daycare centre as a valuable teaching tool.

A book which is going to have a place on our book shelf for many, may years i'm sure as it is just lovely and one that will sure become a much treasured bedtime story! If you have a child who is afraid of the dark, monsters or the like a book worth reading as it may just help.