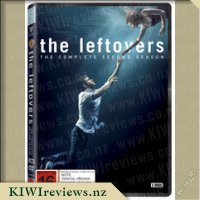 More than three years ago, 2% of the world's population inexplicably vanished. No country, no state, no city was spared - except for one small town in eastern Texas. The town of Miracle is the setting for a tale of two families: the Garveys, whose lives were forever changed by 'The Departure', and the Murphys, a local family who seem to have been spared from an event that shook the world.

I enjoyed season one of The Leftovers and so when I heard there was a second season coming, I was keen to watch it, so when I got a copy of it on DVD I was most happy. This season starts off in a new town with some new characters, as well as most of the cast from the first season. I was a bit confused to begin with but once I got used to the switching between stories and past and present it was a bit easier to get into it all. I really didn't like the new theme song but as the show has gone on, I have gotten used to it, though I do think the imagery suits the show better than season one.

As far as storyline goes, there is a lot going on, from the story of the family in Miracle, to Nora, Kevin, Jill and Lily starting a new life, the priest and his wife, Patty, Meg and a couple of the others. The stories all end up intertwining well and it is a steady build up to the climax of the season. There was one moment that I felt trivialised the real world equivalent (spoilers) but it isn't used as a main plot point, just a random moment (though the final season may wrap that part up). There were some rather interesting moments in this, such as Kevin needing to die to enter a dream state of sorts, I felt that episode was well done.

A bit confusing at first, I ended up rather enjoying this season and I found it in some ways to be worse than the last season and better in many ways. Looking forward to season 3.

Run for your lives! Or better yet, "Stan" your ground and enjoy this all-new collection of American Dad! episodes from the explosive comic minds of Mike Barker, Matt Weitzman and Family Guy creator Seth MacFarlane. Stuffed with celebrity guest voices, including Billy Bob Thornton, Joan Cusack, Sam Elliott, Oliver Platt, and not heavy metal rock god James Hetfield, this hilarious assortment finds the Smith family in a flood of trouble aboard ... more...