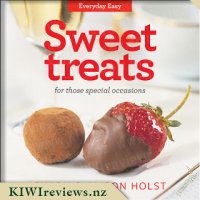 Every now and then the occasion arises when you want something sweet and delicious. You may be celebrating a special event, making a culinary gift for family or friends, entertaining your children (or grandchildren), or just ready to indulge yourself. The good news is you no longer need to sift through your cookbook library or search the internet for inspiration. Simon and Alison Holst have all the recipes you will need in this wonderful new book!

Sweet treats may not be super healthy, but the Holsts are not advocating you enjoy these delicious morsels every day of the week - all things in moderation!

With this in mind, step forth into your kitchen and indulge yourself and others. It would never have occurred to me to make my own confectionery. Not only is it intrinsically bad for you (or so I am told), but it is incredibly difficult to make. Well, the first point might be true, but the second is definitely false. Having never made anything other than chocolate fudge (with varying success) in my life, I embarked on a lolly scramble of my own to see what I could come up with, armed with a brand new copy of Everyday Easy Sweet Treats. The recipes looked pretty straightforward, and two hours later I could confirm that this was indeed the case.

I read through the book and selected four that I thought that I could handle. The instructions were really clear and a minimum of fuss was involved. The recipes I chose to try were Salted Caramels, Fabulous Fudge, Turkish Delight, and Uncooked Coconut Ice. A trip to the local supermarket armed me with all the ingredients I did not already have (except for rose essence which they don't stock, so I got strawberry instead). It took me two hours to make all four recipes; I don't own a sugar thermometer, but those attempts at chocolate fudge making many years ago paid off as I still remembered what "soft ball stage" looks like. This is an essential skill in this style of cooking, I now realise.

I decided to make a dessert centrepiece with some of the sweets mixed with seasonal fruit. I had put the salted caramel mix into a silicon ring mould, and when I turned it out it emerged as a perfect O shape so I put it on a large ceramic plate without cutting it up, and arranged samples of the other three home-made sweets around it and in the middle. I also added some sliced fruit (mandarin, persimmon, feijoa and kiwifruit) to give it more colour and make it look healthy (!). I was pleased with the result as I thought it was an interesting party alternative to jelly and icecream.

Having given samples to various family members, I experimented by putting some of each batch into the freezer and leaving it for 24 hours. The only one of the four listed as being ok to freeze was the coconut ice, but all four emerged from the freezer having survived the experience. Even the Turkish Delight appeared to be unharmed; of all of them, this is the one I thought would not be suitable for freezing. I know that the sweets will probably keep for quite some time in the fridge, but it is good to know there is another way to store them.

I would like to see several things included in the next edition of the book. Although the reader is assured that these are decadent recipes for special occasions only, it would be good to have a reference to the kilojoule/calorie content even if this is very approximate. The reference could be to the entire batch as it would be difficult to isolate a single piece given that sizes will vary according to the sharpness of the knife used to cut it and the crumble factor.

I would also like to know before I make a recipe whether or not it is suitable for freezing. Only two of the recipes are identified in this way, yet I managed to freeze four varieties with a successful outcome. And finally, I would like to know how long each batch will last if kept in the fridge. I work fulltime so if I want to make a batch of sweets for a special occasion I need to plan my time and it could be that I prepare the items several days in advance. Having this information would help me to plan better.

Finally, I love the layout of the book. It is small enough to be opened out and inserted into an A4 clear plastic freezer bag so the pages stay clean when the icing sugar is flying around. The pictures are clear and beautifully presented. I look forward to trying out some more of the recipes next time I have the urge to be creative in the kitchen. There are certainly plenty to choose from.

The bad news? The world is ending. The good news? The Bad Guys are back to save it! Sure, they might have to "borrow" a rocket . . . And there might be something nasty in one of the spacesuits . . . And Mr Piranha might have eaten too many bean burritos . . . But seriously, how BAD can it be?

How bad?! SUPER BAD. It's one small step for the Sort-of-International-League-Of-Good-Guys Guys. It's one giant leap for The Bad Guys.

This is the fifth book in the hilarious series from multi-award-winning children's book creator Aaron Blabey.