« Mark of the Thief review 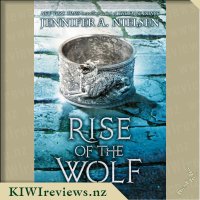 Mark of the Thief #2: Rise of the Wolf product reviews

Nic may have escaped enslavement in the mines outside Rome, but his troubles are far from over. The Praetor War - the battle to destroy Rome from within - is in full force, and Nic is caught in the crossfire. The secretive Praetors are determined to unlock a powerful amulet - one sure to bring the empire to its knees. Worse, the Praetors believe Nic holds the key to finding this amulet, and they will stop at nothing to steal it, even if that means harming the people Nic holds most dear. When Praetors capture Nic's mother, he knows he must do anything to save her. He challenges the Praetors to a chariot race.

If he wins, they will release his mother. But if he loses, he must hand over a magic that will certainly bring about the end of Rome as well as his own life. Can Nic once again harness his magic and gather the strength to defeat his enemies? Or will he lose his mother and bear witness to Rome's destruction?

I  Survived: The Nazi Invasion
Rating: 8.9

The first installment in this series left the protagonist in quite the predicament (stuck between a rock and a hard place, as some would say), and reading the second story directly after the first (maybe about 10 minutes between the two), I did notice a sudden change in the speed of the storyline. A lot of the tension had disappeared. While in the first book, there was always the threat of capture, always being pursued by at least one set of antagonists, the second started rather casually, as if there was no longer an imminent threat.

Ultimately it gives the book a different feel to it, which took me a little while to get used to, but eventually I enjoyed. Based almost entirely around the roman chariot races, the protagonist Nic is more at risk from political threats than physical ones with the antagonist largely not being fuelled in the same way as himself. Again the underlying storyline revolves around the gods, and the powers being unleashed are slowly expanding and increasing. And Nic still tries to find a solution to gain freedom for himself against overwhelming odds. "Keep your friends close and your enemies closer" is a saying that is very much valid in this story.

There is no real sense of movement in the story. No acceleration, and the action is downplayed. But it is replaced with tension, suspense, deception, and an increase in tactics and planning that was unavailable in the first book. You get the feeling of being trapped in an area where everyone is trying to stab you in the back, and you are just waiting to see who pulls the first knife.

I read this over a couple of days, and did find that a lot of the problems and decisions were very similar to that of the first installment, but there was also a lot of character development amongst the supporting characters, which added depth to the book. It captivated me less than it's predecessor, but overall that point is irrelevant. I'm still itching to find out how the story ends, and I'm pretty disappointed that I have to wait until January 2017 to find out.

Having thoroughly enjoyed the first book in this trilogy, I could not wait to read the second. Frequently, when a book or movie appears as a sequel, it loses the impact of the initial story and appears rushed and/or less convincing in its detail. I was delighted to find that this was not the case with this book. It has all the appeal and excitement of the first instalment, but has followed a different storyline so as to present a completely new adventure.

One of the big selling points of this book has got to be its appeal to reluctant readers who would rather be on the sports field than be caught reading! There are no-holds-barred descriptions of bloody fights and gruesome deaths which will capture the attention of unwilling students and reel them in. Reading is a skill which is often acquired in the process of doing something else, so a young person who is enjoying a rollicking yarn is likely to pick up the skills of making sense of text without so much as realising that this is happening. It is just a matter of finding the right story!

The main event featured is the chariot race - one of the sports of the ancient Romans and one which has often featured in Hollywood movies over the years. Most readers will be familiar with this particular sport, but the amount of detail in the description of the chariots, the horses, and the charioteers proves that the author has really done her homework. There has been an impressive amount of research carried out to ensure that the background to the story is as authentic as possible.

Interwoven with the chariot race itself is a story with strong themes of political intrigue and betrayal, cruelty and friendship, family ties and allegiances. Added to this is a generous helping of Roman mythology and the supernatural; as in the first book, the main characters are able to harness the power of magic, but there are also more mythical creatures - Callistus the Unicorn, and the Wolf of Mars - who join Caera the griffin as Nic's associates. There is even a Draco (dragon) although this is one creature that nobody, not even Nic, would want as a sidekick!

All the ingredients of a high stakes adventure story are here - the exotic background, the magic, the adventure, and even a hint of romance. I was almost angry when I reached the last page; I wanted to read on and join Nic in his next adventure. I have the feeling that anyone who has followed the story so far will be waiting impatiently for the last book in the series.