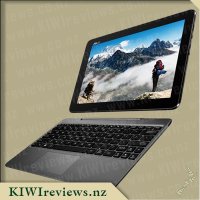 •  Incredible 2-in-1. Amazing battery life!
Let's admit it: carrying both a tablet and a laptop is a nuisance. The 10.1-inch T100HA is a 2-in-1, which means exactly what it says - it's a laptop with a keyboard that detaches, turning it into a 8.4mm-thin and 580g-light Windows 10 tablet (yes, Windows 10 is pre-installed!). So it's two devices, in one amazing package. It's a simple idea that's elegant and convenient, too. Need to work? It's a powerful laptop. Time to relax? Detach the keyboard and it's a handy tablet. No fuss, no hassle. What's more, it's the only 2-in-1 with the revolutionary time-saving USB 3.1 Type-C port. And with up to an incredible 12 hours battery life, it's always ready - for work or play!

•  Brilliant design. Brilliant colors.
With a lid finished in ultra-cool anodized aluminum, T100HA is not just designed to make a style statement. Yes, it's elegant. And of course it's sophisticated. But it's also durable and practical - and it feels great! We've also made it easy to match T100HA to your personality, with four vivid colors available: Tin Grey, Silk White, Aqua Blue and Rouge Pink.

•  Even thinner. Even lighter.
The original Transformer Book T100 was no heavyweight, but with T100HA we've taken it to a new level. At just 8.45mm thin, the tablet is 20% thinner than before, and weighs a mere 580g. Even with the keyboard attached, T100HA still a very slender 16.5mm thick and weighs just under 1kg, so you'll never have an excuse to leave it at home. Take it everywhere, store it anywhere.

•  12 hours of battery power!
When we created the amazing Transformer Book T100HA, we wanted to make sure it was out of the ordinary in every way - including battery life. The ultimate portable companion deserves the ultimate stamina, and with up to 12 hours battery life you can rest assured it will keep going as long as your mobile lifestyle demands.

•  USB just got smarter
Sometimes, smaller can be better. The humble USB port is great, but it's definitely a bit clunky, and can be awkward to plug things into. For T100HA, we've chosen the latest streamlined version of the USB port, called a Type-C port. This is much smaller than a standard USB port, but it does just as much and has the extra benefit of being reversible. So there's no more struggling to work out which way up a connector is when you want to plug it in. And you still get the blindingly-fast capabilities of SuperSpeed USB 3.0, so data transfers are quick and speedy - up to 10 times faster than USB 2.0!

•  Outstanding Performance!
Transformer Book T100HA is powered by the latest quad-core Intel 'Cherry Trail' processors, so it not only breezes through everyday tasks, it also delivers faster-than-ever graphics - up to twice as fast as previous generations! With outstanding day-to-day performance, T100HA lets you multitask seamlessly and get more done in less time.

•  The best Windows 10 experience!
Windows 10 is new and improved, but instantly familiar, making it the perfect choice for T100HA. Not only is it incredibly easy to use, but it looks great and brings back some of the things you loved about Windows, such as the Start Menu. And with pre-installed Office Mobile apps and Cortana - your very own personal assistant - you can get up and running right away!

There are those who love their laptops... while others are equally passionate about tablets. The big 'line in the stand' is how attached you are to a physical keyboard over an on-screen keypad, and for some, that divide is as deep and imposing as the Grand Canyon. Then, a few years back, we saw the Hybrids starting to show up. Tablets with keypads, or notebooks with detachable screens - depending on which side of the canyon you called home-base. To-MAY-toes or to-MAH-toes, the reality was... you had one type of device that could be sold to either camp now.

As with all things, the tech needed time to mature, and in fact many would argue it's still in that phase. Along the way, as expected, a few dead-ends get explored and fail to capture the market's interest, and dollars, as thoroughly as the manufacturers would hope... ASUS amongst them. A short while ago (by human standards, aeons ago by tech-evolution standards) ASUS brought out the T100, and while it did well in the public eye, it got a few hot-pokers from the critics. Roll the clock forward and we see the T100HA arrive, and it seems to have made some efforts to keep the good parts and polish up some of the rough edges of it's predecessor. But, the big question is, did it succeed?

The 10.1-inch T100HA is aimed at the average user, so it's got to try and balance power against price and find that golden spot where you are getting a good bit of kit for a good price. The T100HA would be suited to young adults who want portability - a small screen and light weight, good for staying in touch and light workload, but not needing the grunt that productivity work would impose. Intermediate to high-school students would really be a great market for these. In that regard, the T100HA sits well and provides what it promises at a fair price, while also allowing the flexibility of a desktop notebook for classroom or study room usage and the ability to quickly switch to tablet mode by dropping the keyboard in their bag and using the touchscreen and gesture control built into Windows 10 to browse their favourite online media streams.

One of the strange trade-offs ASUS went with was the screen resolution. In an age where even cellphones are coming out with 1920x1080p HiDef, this tablet stops short at 1280 x 800, a somewhat underwhelming step-down from what is now considered 'standard' in the marketplace. This is especially obvious when you consider at 10.1 inches, the screen is too big to hide the jaggy edges that come with a mere 800 pixels in vertical resolution. Couple this with a less-than-stunning 5MP rear-facing camera - the better of the two cameras on board, the forward-facing "selfie cam" being just 2MP - you can't help but wonder what stunning extras ASUS mounted in this baby to offset such a radically under-powered visual system. The best answer I could come up with was... they have the new USB 3.1 Type-C plug on the side, and they've doubled the RAM from the previous model - now up to 4GB on on-board RAM.

In terms of processor, you have an Intel Quad-Core Atom "Cherry Trail" Z8500 Processor, which is actually a fairly acceptable CPU for a device such as this - one that isn't designed for, targeted at, or expected to perform, any really heavy lifting. You can opt for models with 32/64/128GB eMMC drive, but the "video card" if you will, is still using the integrated Intel HD Graphics chipset. I repeat the comment about "no heavy lifting". In terms of connectivity, it comes with Dual-band 802.11 a/b/g/n Wi-Fi, Bluetooth V4.0 and a MicroSD/MicroSDXC card reader. Hardline ports include a combined 3-stage microphone/headphone jack as you would find in most smartphones these days, a micro HDMI out and a standard USB 2.0 connection on the keyboard base in case you want to leave it at home acting as a docking station for the tablet, connected to a hub or printer.

Usability-wise, the biggest issue would have to be the keyboard size. Built for use exclusively around the Shire or deep in the Moria mountains, the keyboard is "snug and compact" to be polite. Those used to full-sized keyboards will rapidly find themselves brutally violating the English language with typos every second word... so maybe you should practice typing with chopsticks or get a younger sibling to act as dictation typists for you. That said... the on-screen keyboard is simply diabolical and I would strongly recommend one of the first apps you install is a better one. For those with smaller hands, greater dexterity or both... you'll be fine. Regardless of hand-size though you'll likely find the trackpad to be... umm... *mumble mumble be diplomatic mumble*... erratic. When it works, it will work just fine. Hold your tongue the wrong way while the wind is blowing at a certain angle, or something equally as hard to fathom, and it will go bonkers on you for a brief spell, or just stop responding. Maybe that USB port would be well served by holding a minimal-profile dongle for a cordless mouse. Also, use the headphone jack, because the speakers are frankly rubbish.

Overall, it has to be said that battery life is probably the biggest highlight after "a sturdy metal structure" because at nearly 13 hours of careful nurturing, or just under 7 hours of hard thrashing, this is one of the best "tablet" batteries I have encountered. I found that I was more inclined to use it with a full-sized Bluetooth keyboard connected and tolerate the extra battery drain than I was willing to peck'n'poke at it using the supplied keyboard. So... for me, I'm feeling like the keyboard was a bit of a wasted kit, and really only served as a "potential armour plate" for the screen during transport. Would I buy it? Not really. Would I recommend it to a friend? Yes, if they were a student who needed something light, easy to carry in a shoulder bag or backpack, and who wanted it during school hours only. It's really well suited for the "basic interface" and "WiFi Surfboard" style of usage and would not be out of place on the cafe tables on campus. The range of colours gives ample "self-expression" opportunities for those into that sort of thing, and it doesn't really need a case or cover. Priced around the same as a mid-range laptop these days, I do think it's a little over priced though, considering the level of tech inside the shell.