ProdID: 6970 - Intruders (aka Shut In)
Directed by Adam Schindler 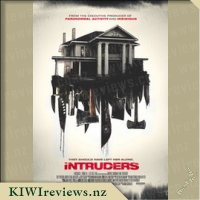 Intruders (aka Shut In) product reviews

Anna suffers from agoraphobia so crippling that when a trio of criminals break into her house, she cannot bring herself to flee. But what the intruders don't realize is that agoraphobia is not her only problem.

I enjoy most movies of the horror/science fiction/thriller/"splat" genres. Some of my all-time favourites are the perennial B grade movies from the old Hammer studios, and psychological thrillers such as "Psycho" and "Scream". This is the reason I was drawn to "Intruders" (also known as "Shut In") as it promised a range of horror conventions suited to a film viewing on a stormy evening indoors!

The DVD cover features a graphic of Anna's house which appears to be mirrored in a lake, but, instead of a reflection, shows a collection of butcher's implements which are matched by length to the height of the house above. This static image is echoed in the DVD loading screen, but here the hanging knives are animated so that they appear to swing from the house. I thought this was an innovative way of foreshadowing the plot about to unfold.

The opening sequence is promising. Frederik Wiedmann, who composed the musical score, is a veteran of many horror films so knows how to set the scene for a suitably spooky ambience. Don't miss the beginning as it is pivotal to understanding the storyline and the main character's (Anna's) motivation. The film title which follows is simple but effective. The single word "INTRUDERS" appears on the screen but then the letters melt together until just four ominous letters "I RUE" remain briefly before fading out with the rest. No other titles follow - the cast and crew lists do not appear until the end titles.

After that, the film appears to be heading towards a story reminiscent of a combination of darker versions of "Home Alone" and "Panic Room", but it soon branches out in a different direction. Now the director begins to toy with genre, adding clues periodically to explain events, but actually generating more questions than answers. There are times when the story becomes quite confusing and even disjointed. Viewer speculation is good to a point, but it is not a hallmark of the horror genre, and even a psychological thriller needs a rationale for it to work. At times I was quite confused as to what was happening.

Anna's house is a delightfully decaying Victorian mansion set in Shreveport, Louisiana. The structure is damaged in places; cracks appear in internal walls, and mouldy patches and peeling wallpaper are evidence of an unhealthy environment. The mismatched furniture and drapes range in style from Edwardian to mid-20th century. Some rooms are clean and tidy while others are dirty, piled high with rotting junk and discarded belongings. The effect is of a home that was once welcoming but has now been abandoned by its residents. Internal alterations may also have taken their toll on the basic structure; it appears that some of the rooms have been extensively modified. The horrific reasons become clear as the story unfolds!

The acting is variable. Sometimes it transcends the melodrama which is usually associated with the horror and thriller genres but then loses impact as it tries to take itself too seriously. I think that horror movies should always have an echo of black humour to temper the action. Thrillers can more safely present characters who are black-and-white, but even then there should be other, less driven, characters to complement them and maintain viewer interest. For me, the best acting in this movie comes from Beth Riesgraf as Anna, and Rory Culkin as Dan. Both of them are reasonably convincing in their roles.

The full-on special effects are worthy of a "splat" movie, and certainly justify the R16 certificate awarded to the film. They are not for the squeamish; in conveying the violence of the main characters, they serve as shock tactics for the unsuspecting and reinforce that this is not a movie about everyday people. (The one character who appears to have some "normal" common humanity is Rory Culkin's Dan, whose relative innocence is quite appealing. I actually thought he was rather sweet.)

All in all, I did enjoy the film. I have to admit to watching it a second time to tie up some of the loose ends, and this worked well. I think you need to approach a film like this in the spirit in which it is made and just go with it. And now I am just off to check that I locked the back door ...