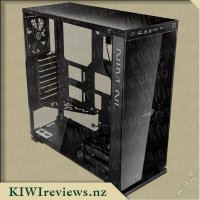 The 805 features a brushed-metal effect front I/O panel that comes in your choice of black, yellow or red finish. The black and yellow versions feature a white LED backlight behind the In-Win logo, while the red version features vivid red LEDs behind the logo. This logo will automatically illuminate when you power up your system.

When it comes to PC cases, you have a number of 'genres' to choose from these days, and there are few cases that hybridise those forms. You have your 'budget' cases - those poor, sad looking plastic boxes that have as much style and appeal as a fruit packing crate, and about the same price bracket. Then you have your 'commercial' cases which are steel boxes with reinforced edges and hole-punched tabs for slipping a padlock through so no-one 'accidentally' mistakes the hard-drive for their cellphone and takes it home, then you have the gaming, or 'bling' cases - wide, open-plan frames that are little more than reinforced scaffolding to hold the glass in shape, and provide you with something to cable-tie half a mile of LED lights to. Usually fitted with liquid-cooler vents as well, just for good measure.

So, when I unboxed the In-Win 805 case, it was a bit of a confusing situation, because I found the only box I could put it into, was the one I just took it out of. It didn't seem to fit into any of the genres - it clearly wasn't a budget case, it wasn't open-plan enough and didn't have enough glass to be a gamer rig, and it wasn't an ugly steel cage to keep all your slave-gnomes... erm... I mean PC parts, in. It was, if anything, a fairly stylish hybrid of the latter two - it was sturdy and secure, but had the two largest sides made of tempered, and slightly tinted, glass. Some innovative design had gone into the internal layout, but I wasn't too sure it was going to live up to the promises. Now, since I am not a gamer, I don't have bleeding-edge parts just laying around on the off-chance I will have to test a case's thermal-offloading capabilities... so I had to borrow a pile of gear from a couple of local shop. Because none of them wanted the others to be identified, it was decided that to be fair to everyone, I could promote no-one, so no photos or video have been taken for this review.

Measuring in at 0.044 cubic metres - 48cm tall, just over 20cm wide and almost 46cm deep - it's a fair-sized case that will be more at home on the floor than on a desk, though this will affect ventilation and heat-dissipation if you have fluffy carpet... It's a really odd, and possibly fatal design, but I'll cover that later. The cavity inside is spacious, and will accept anything up to an ATX motherboard, and a power supply up to 220mm. This is a very standard mid-tower in that regard. You can even rest assured that high-end video cards will manage to fit, with a little jiggle here and there, and with the unusual choice of making all the I/O port covers into one gigantic hole in the rear of the case, double-thick cards won't end up with a finger of metal running across their faces. Great if you find your cables have slightly-larger plugs on them. Speaking of odd omissions, the case also doesn't allow, and I mean it will NOT allow, you to fit a motherboard I/O shield. This is a strange turn, and one I personally favour as they annoy the heck out of me. Some say it helps reduce dust inside the case... to which I reply "so point a fan at it, and you'll not only keep the dust out, but add an extra air-flow for cooling." With this case, that could be a mixed blessing.

When it comes to airflow and cooling, it is said that a well-structured arrangement of the air currents will allow a builder to maximise the cooling abilities to the areas of maximum heat-generation. That's basically the power supply, the CPU and the hard-drives. The design of the case is such that the PSU must be mounted upside down, because there are no cut-outs in the floor of the case to allow it to suck air up from underneath... which is precisely where the air is supposed to come from in this case... but only from the front half of the underside it seems. Frankly, I am at a loss to come up with a rational for this bizarre decision. Why they couldn't punch even a few dozen ventilation holes in the floor plate under the PSU mounting bay, I have no idea... instead they created a purposeless half-shelf above the PSU bay, and ventilated that, meaning the PSU will be pulling warm air in from the interior cavity and blowing it out the back.

As for getting air into the rest of interior cavity, that job is left to the front fans... which the case doesn't come with. Instead, you are presented with a single, rear-mounted, exhaust fan. While this means you aren't paying for items you may not need, preferring instead to transfer the sparkly LED-emblazoned fans you already have, this means if you are building your first big-rig, you are going to have to invest in at least 2, possibly more, internal fans. On the plus side, the front mountings will happily accept either 120mm or 140mm fans, as well as a radiator if you have a liquid-cooler in mind for the beast. However, be warned that you only have 20mm of clearance between the feet and the case, so there's not a huge air-gap and airflow is restricted by a removable woven-fibre filter pad. While the tempered-glass front panel is super-stylish, and will look stunning with some LED fans mounted in there, I really would have liked to have seen an easy way to dismount that panel allowing air to flow in across the entire front face, giving you some serious heat-dissipation ability. As it is, I didn't feel comfortable installing the high-end gear I had initially been loaned. If I ran it up to full speed, I felt there was too strong a risk of burning something out. So a quick downgrade to 'medium-range' gear ensued, and all overclocking was disabled. This resulted in a high-end home machine that had fairly good game capabilities, and kept the heat creation under control.

That aside, there is a HONKING pile of unobstructed space inside that will allow you to slap in multiple dual-slot cards, and plenty of room for you to fit a huge heat-sink - liquid-cooled or not - on the CPU. Having all this room to burn does mean that you lose somewhere else, and that ends up being in storage bays. You have a small array of storage bays - 2x 3.5" and 1x 2.5" - stacked in a removable metal cage on the floor at the front. You also have three attachment points on the rear face of the motherboard mounting plate - an odd place to put them, sure, but a great way to utilise usually-unused space. With a glass panel as the wall on that side too, you're going to want to ensure your cables are laid out in a pristine way and you can easily slap some more LED lights back there to provide optical masking.

What you lose entirely though is a 5.25" bay... yup, that blu-ray burner you bought is going to have to migrate to an external USB case, or join the CD/DVD burners in that dusty box in the corner of your wardrobe. This one thing, above all others, frustrated me beyond words. A small modification to the cutting die for the mounting cage could have allowed an optical drive to be fitted, but that still left you with the issue of a solid glass wall - side and front - blocking any possible tray-opening. I still burn a lot of backup data-DVDs, so this killed any chance of this case being of any use in the office - so it finally fell over the edge and firmly into the "gamer bling" genre.

Overall, the best way to sum up this case is: "It's all about the case." There's lots of style, lots of visual bling if you pack it with LED-encrusted parts, and not much that really recommends it to me as a functional case. It makes for a really stunning display rig - and it looked amazing at night in the window display of one of the shops that loaned me gear, but after all is said and done it just didn't live up to the potential it could have had, if a few smarter decisions had been made about airflow and storage mounting options. All of that aside... it does still have appeal to a home-user who wants something vastly nicer to look at than a case that looks like a giant castrated lego brick on it's end. This case is eye-catching, and if you don't stuff it full of high-end gear, you can run some fairly grunty guts without killing them. One hint that was discovered during installation - instead of mounting the fans to the supplied bracket in a manner that puts them into the front cavity... that reduces the air-intake to a mere sliver. Instead, I mounted the fans on the rear-facing side, so that the fans were actually inside the main cavity - which drastically increased the air-intake and allowed a much more efficient and effective current to flow. The difference was remarkable when the temperatures were assessed. In the recommended configuration, the CPU ran at 87 degrees, while the improvised mounting position caused the CPU to get a more effective cooling, taking the running temp down to a far less stress-inducing 69 degrees. Would *I* buy it? No. It doesn't allow the functionality I need. Would I recommend it to others? As long as they are smart about fan placement and what gear they install, and have no need for internally-mounted optical drives... a resounding YES. It's a stunning case, and despite some frankly puzzling decisions when it comes to design, there's actually nothing you can't work around or compensate for if you have to. For a home computer for the teenager who only wants to play games on consoles, this case has far more style than it's price tag would lead you to believe. There *is* a market for this case... but I'm just not the target buyer.

Security and stability aplenty. It's not enough to store your files. You have to keep them ... more...