« The House on the Hill review 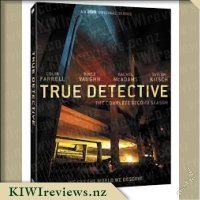 The hit HBO drama series True Detective returns with a new case in which bizarre murder brings together three law-enforcement officers and a career criminal, each of whom must navigate a web of conspiracy and betrayal in the scorched landscapes of California.

Featuring an all new cast, Season 2 stars Colin Farrell (Golden Globe winner for In Bruges) as Ray Velcoro, a troubled detective whose allegiances are torn between his masters in a corrupt police department and the mobster who owns him. Vince Vaughn (Wedding Crashers) portrays Frank Semyon, a criminal and entrepreneur in danger of losing his empire when his move into legitimate enterprise is upended by the murder of a business partner.

Rachel McAdams (Midnight in Paris) plays Ani Bezzerides, a sheriff's detective whose uncompromising ethics put her at odds with others and the system she serves. Taylor Kitsch (HBO's The Normal Heart) portrays Paul Woodrugh, a war veteran and a highway patrol motorcycle officer, running from a difficult past and the sudden glare of a scandal that never happened True Detective is one of those series that gets picked up and becomes a cult classic, where everyone is raving about how brilliant it is (not dissimilar to the attitudes around Marvel's Daredevil, Breaking Bad, and Game of Thrones). So after two seasons had aired, I saw this product and decided that it was about time that I checked it out and decided whether or not the bandwagon was truly worth jumping onto.

The second season starts with a new cast, so there were no concerns for me regarding missing any backstories or plot points from season one (just like American Horror Story, which bases each season around a different unconnected story, despite recycling the acting staff). True Detective's second season starts fresh, with a new location, new story and new actors/actresses.

Now it has nothing to do with the show itself, but I have to say that I am not a fan of the opening credit sequence. One of the most boring, spoken-word "songs" that I have had to sit through, and despite clicking on the "play all" button on the DVD, I still had to listen to the 2 or minute sequence at the beginning of every episode. It's just a small thing that annoys me, and while it provides a dark, gritty, and confusing feel to the show, I found it more cumbersome and distracting, than helpful.

The series is non-episodic. That is an important thing to mention straight off the bat. This story arc covers the whole season, and mini storylines will often end and start, partway through each episode. For those used to following one event a week, it can be a little disconcerting to begin with, with episodes feeling longer (if it continues after a large climactic scene) or short (if you don't even reach the next "focal point"). But that is one of the aspects that I came to enjoy from the series. It isn't predictable. You can't look at a corrupt police force and know how it goes; the corruption enters from many players at many different levels, and it plays a huge part in the season. There are many players behind the scenes that have significant impact on the story with little to no screen time. It's brilliantly done.

But the pacing was sometimes a bit too slow. The first episode for instance, where you are introduced to the characters, does just that, and only that. You are provided no real information as to how anything is connected, and that was how I felt for the first few episodes. It initially struggled to maintain my interest, as character after character was introduced and thrown at me. With so much complexity in each character's backstory, much of the time it would overpower the main storyline, and leave you confused as to the plot and where it was going. BUT, eventually the pacing began to improve. As evidence, clues, and characters began to recur and repeat, pieces of the puzzle began to start making sense to not only the characters in the show, but to myself, the viewer.

By the final three episodes, it was action packed, and I really began to enjoy the show. I began to empathise with the originally objectionable characters, and you find yourself hoping against all odds that they succeed in their quest.

Casting-wise, I was originally skeptical. Colin Farrell didn't strike me as a convincing cop for a while, Rachel McAdams looked like she was there just to bring in the young male audience, and Vince Vaughn took a while to shake off the air of a comedian. Over time, they started to convince me; not by their successes, but their responses to failures. While Farrell never looked right to me, he acted appropriately and honourably. McAdams I liked, but was overshadowed by Farrell, and even Kitsch. Vaughn would probably be my choice for best actor in this season. By the end he was fully immersed in the role, and he both looked and acted accordingly. Highly engaging.

Too much to read? Simply put, this season does not require you to watch the first season. the initial episodes are rather slow, but the episodes will eventually escalate and accelerate to a rather fitting climax. Vince Vaughn was the actor to watch; a great performance. Not the best show to watch one episode a week, but for a marathon? Worth a watch.

Mega Structures Mega Movers: Air-Land-Sea takes an eye-popping look at some of the greatest structures and machines ever created.

Get inside these superstructures and uncover the cogs, bells and whistles that make them work.