The Art of Being Normal review 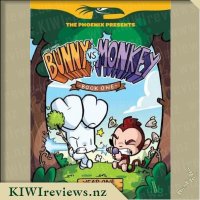 Disclosure StatementFULL DISCLOSURE: A number of units of this product have, at some time, been supplied to KIWIreviews by the company for the purposes of unbiased, independent reviews. No fee was accepted by KIWIreviews or the reviewers themselves - these are genuine, unpaid consumer reviews.
Available:
February 2016

The British Space Agency has sent a monkey into space. But all does not go well with the flight and Monkey's spaceship only just clears the first hilltop before crash-landing in a peaceful forest. Thinking he is on a new planet, Monkey decides to claim it for his own. But the other forest creatures have something to say about that. Namely one - 'Bunny'!

Going by the cover this looked like it could be a fun and entertaining book for my three children, the picture on the cover is lovely and vibrant and managed to catch the kids eyes from under the coffee table. I thought that this was going to be a one story comic however it is full of 2 - 3 page tales (it gets longer near the end) about Bunny, who is happy with his life in the forest and doesn't want it to change and Monkey, who wants to become the king of the forest.

There are eight main characters, who we're reminded of at the top of each page, which easily turned into a little game for my youngest ie. Here's pig, can you find it on this page? My six year old wasn't too interested in this book but my eight year old rather liked looking through the book and figuring out some of the words. For me, this isn't a book I enjoyed, it just got a bit repetitive to me and a rehash of various other books, cartoons etc. Luckily this book wasn't aimed at me, but at my kids, so it is a book that will get held onto and reread time and time again.

I did like the format of this book - it is divided into "chapters", each loosely linked to the next. Most of them are two pages long so they are about right for a three-year-old's attention span/ Bright colours and boldly drawn animals are also designed to appeal to small children. The storylines push the boundaries of politeness although the "naughtiest" word used is "BUM!" which is used to describe everything from Monkey's head to the way the animals happen to be feeling at the time. The average pre-schooler finds this hilarious, and Miss Three burst out laughing every time the word occurred

The storyline features Bunny, who is the leader of an assortment of woodland animals. Or, at least, he is the leader until his rival Monkey arrives and wants to change things to suit himself. In fact, Monkey wants to take over as leader completely. Other animals include Bunny's not-so-bright friends (a pig and a squirrel) and Monkey's sidekick, the naughty inventor Skunky. Factor in a robot who enjoys swimming and you have the most bizarre collection of animal friends that ever lived in one place. There is even a grumpy bear who just wants to be left alone to sleep.

The area they live in is called The Wood, but nothing could be further from The Hundred-Acre Wood of Pooh Bear. This is very much a place where modern technology reigns and the animals are constantly getting into trouble. At the very start of the story, Monkey is catapulted into The Wood as part of a scientific experiment. From this point, the story becomes more and more outlandish and comical

The language is not always easy for little ones to follow, but Miss Three was able to work out what was happening by looking at the drawings.. They were clear and very easy to follow, and with a little help she could work out what was going on. Mr Six,however, could read most of the story by himself and when he came to some of the more colourfully written words like "rummmmmble" and "invisibibble" he was able to sound them out.. There was also the chance to try his reading skills out on harder words like "diabolical" and "renovation", and there were new words like "hibernation" and "chameleon" which were defined in the context of the story so he was able to understand them.

Miss Three had heard enough after three chapters and was ready to stop until another day, but Mr Six was enthralled and happily read on until he had to stop for dinner!! I was surprised at just how successful the book was for them. I had imagined it was more suited to older children, but it appeared to be just right for their age group. We will definitely have to get Part 2 now to see what happens next.

Four Christmases have passed since the world went to war in 1914. Struggling to survive in the trenches amid the terror of gunfire and the whine of warplanes, Kiwi soldier Henry Hunt rescues a shaken little dog. He has no idea he will soon face a disciplinary hearing. To Henry's relief, the Major allows the little fox terrier to live ... this time. Henry finds the dog is not only a comfort to his fellow soldiers on the battlefields of ... more...