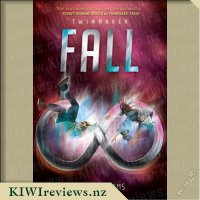 But in the Yard there are two Clair Hills, and their very existence causes cracks that steadily widen...Getting inside is the easy part. Once there, Clair has to earn the trust of her friends, including the girl who started it all - her best friend, Libby. But they don't know what's happened to the real world, and the other Clair is headstrong, impulsive, suspicious - just like Clair herself used to be. And that makes her dangerous...

As Clair struggles to find Jesse and make peace with herself, a surprising new ally emerges from the ashes of the world. Together they fight their way through the digital and political minefield in the hope of saving the world once and for all. This time Clair has to get it right or lose everything...

The final chapter in the Twinmaker saga picks up right where book 2 leaves off, though we switch to the point of view of the digital copy of Clair in The Yard, running as a self-aware datagram in the same way "users" did in the TRON movies. Having trigger Ant Wallace's trap, causing the cascade reaction that destroyed all 'unstable matter' on Earth... which of course is everything created by the use of D-Mat technology, including people.

The world 'inside the machine' is a pretty neat one, and has some wonderful elements from movies such as the Matrix trilogy, Inception and TRON, as well as some wonderfully imaginative and original concepts to keep it fresh and interesting. Personally, I loved the concepts behind the digital simulation world, and the way the geography could be segregated, overlapped, or warped into new shapes as long as you had the right access, and force of will. This made the 'world' so much easier to accept and attach to, which still keeping those key elements of individuality and uniqueness.

Clair is, fundamentally, a really annoyingly naive, overcommitted, misunderstood teenager who would probably have me biting back homicidal urges were I in the place of one of her cadre. It seems that every decision she makes only leads to more vastly scarier situations than those she's trying to find ways out of. Her greatest strength is the group of individuals she becomes surrounded by... including one person she really didn't expect to meet, and who takes her by surprise in a very unusual way. She makes the perfect protagonist for a story like this - a kid who got in WAY over her head, and seems to be the catalyst for every pile of turd lumped on the human race.

Seen as both a hero, an annoyance, a means to an end, and the ultimate betrayer of humanity, she is forced to really look at herself at every turn - in more ways than one - and assess whether her chosen course of action is going to be the lesser of all evils, or the trigger for the next apocalyptic event. More to the point, in doing so she also forces those around her to look hard at their own motives, and some of them decide that 'the dark side' - for lack of a better phrase - is where they really see themselves... or where they really don't belong at all.

Overall, this is an excellent culmination for the story arc. It ties up all the major plot threads, putting everyone right where they can best move on with their life. It also leaves a few holes, but each one of them could easily be the launching point for a spin-off story, or even short series. There were a lot of characters I'd love to know more about, in terms of their ongoing story. When you have a world to rebuild and almost the entire population of the planet has been turned to dust, you don't just vanish into the shadows - you become one of the new founders, the rebuilders, the new architects of humanity's future. I hope there will be more. This is the sort of modern Young Adult fiction that I would be glad to see my kids reading. It could be as prophetic for them as Arthur C. Clarke was for the last two generations!

The Mummysons are just your average, everyday family. Yes, they have a pet mummified fish and live in an Egyptian pyramid. Yes, Milo Mummyson is studying moths - the one thing deadly to mummies. Yes, Muriel Mummyson is making plans to build the ultimate pyramid play park. Yes, their dad is obsessed with creating a delicious Sphinx Drinx, if only it didn't stink. And yes, something is destroying Freak Street park, while families are trying to picnic.

But that's nothing out of the ordinary, right?