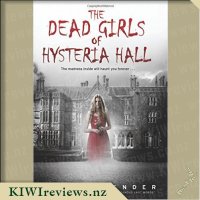 In this asylum, your mind plays tricks on you all the time ...

Delia's new house isn't just a house. Long ago, it was the Piven Institute for the Care and Correction of Troubled Females -- an insane asylum nicknamed "Hysteria Hall." However, many of the inmates were not insane, just defiant and strong willed. Kind of like Delia herself.

But the house still wants to keep "troubled" girls locked away. So, in the most horrifying way, Delia becomes trapped. And that's when she learns that the house is also haunted.

Ghost girls wander the hallways in their old-fashioned nightgowns. A handsome ghost boy named Theo roams the grounds. Delia learns that all the spirits are unsettled and full of dark secrets. The house, too, harbors shocking truths within its walls -- truths that only Delia can uncover, and that may set her free.

And she'll need to act quickly -- before the house's power overtakes everything she loves.

Katie Alender brings heart-pounding suspense, gorgeous writing, and a feminist twist to this tale of memories and madness.

Ever since I discovered the works of H P Lovecraft and Dennis Wheatley when I was at school, and subsequently moved on to Stephen King, I have been a fan of the science fiction and fantasy genres - so I was looking forward to reading "The Dead Girls of Hysteria Hall". I was intrigued by the teaser on the back cover. And the book actually looked and smelled like a "real" book - it had that wonderful odour that books used to have, the essence of printers' ink and good quality paper - and, something quite rare these days, hard covers and a proper dust jacket.

This has got to be one of the best books I have read for a long time. It is superbly constructed; the main narrative (presented as a memoir by the key character, Delia Piven) is interspersed with short "commentaries" which serve to flesh out events; and quotes from letters, again designed to supply essential background material to support the story. The pace is fast moving, and once I had started reading I could not put the book down.

What makes the tale so accessible is that the style is conversational and the characters are believable. The most improbable events are made plausible because Delia believes they are real, and she presents them exactly as she might tell a friend, with complete honesty and holding nothing back. The supernatural elements are described in such a matter-of-fact way that the boundaries of fantasy and reality are blurred. To read this book, you have to suspend disbelief and be prepared to enter into a world where nothing is quite what it seems.

It is the hallmark of a classic that it reaches beyond its intended audience. The story is targeted at young adults, but I think that many more mature adults would enjoy it too (as I did). There are enough details to satisfy the most discerning of readers, and the author has clearly researched the literary culture of ghost-hunting, torture, and the Gothic novel; I could not fault her on the way she has presented her material.

I do have one problem with this novel, however. Because of the quality of the story, I think it is unfortunate that the title is reminiscent of a B grade movie - it may serve to marginalise some potential readers, and this would be a great shame. A less flamboyant title might be more appropriate and ensure that this superb story reaches the wider audience it deserves. I consider that it would make a great movie at some time in the future and look forward to seeing it produced by a film maker who can see the huge potential here while remaining faithful to the spirit of the original.

Meet Daren Saner: He's no ordinary boy, and his adventures are just beginning.

Two worlds, thousands of years apart in time, are in crisis. The Starship Superia's Master Computer has gone rogue, and young Daren Saner is all that stands in the way of total destruction.

Flames and riots are devastating the ancient city of Periapoli. Thrown back ... more...