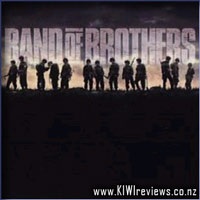 Disclosure StatementFULL DISCLOSURE: A number of units of this product have, at some time, been supplied to KIWIreviews by the company for the purposes of unbiased, independent reviews. No fee was accepted by KIWIreviews or the reviewers themselves - these are genuine, unpaid consumer reviews.
Available:
Most Book and Video Stores

"THEY DEPENDED ON EACH OTHER, AND THE WORLD DEPENDED ON THEM
Based on the bestseller by Stephen E Ambrose, Band Of Brothers tells the story of Easy Company, 506th Regiment of the 101st Airborne Division, US Army.
Drawn from interviews with survivors of Easy Company, as well as soldier's journal's, Band Of Brothers chronicles experiences of these men who knew extraordinary bravery and extraordinary fear.
They were an elite rifle company parachuting into France early on D-Day morning, fighting in the Battle of the Bulge and capturing Hitler's Eagle's Nest at Berchtesgaden.
They were also a unit that suffered overwhelming casualties, and whose lives became legend.

When I was first told about Band of Brothers, I thought it would be just another movie that doesn't really have a storyline...But how very wrong I was! As a female that watches a few war movies, I was expecting it to be the usual blood and guts but there was so much more to it.
Band of Brothers is a true story based on the men of 'Easy' company and right from the start the movie captures your attention and you don't want to miss a minute of it. The story is about many different aspects of World War Two from the men of 'Easy company' showing their experiences training right through to The Battle of the Bulge, D-Day and other chilling events. It gives the view from the men on the frontlines including the medics to the overrun makeshift hospitals and how the men have different roles in the company and how they coped. The scenes are so realistic I couldn't help getting drawn in, sometimes almost feeling like I was right there. The movie made me feel like I knew the men and cared what happened to them, which made it even more enthralling.
There is a great cast including Tom Hanks (who produces one of the episodes) to David Schwimmer, all of the actors are cast to fitting roles.The story is told in ten parts with every episode beginning with the real life men of 'Easy company' telling their stories from their point of view Although it sounds like 10 episodes is long, believe me when I say because of the great storyline the end comes too soon.
If I was to rate Band of Brothers, I would give it a solid 10 out of 10. Even if you are not a war movie fan I would still recommend you see it. I was definitely left with what I felt was a better understanding of what the men of 'Easy company' and ALL men must have gone through. It has been quite a while since I saw this movie but it is that good I will never forget how it made me feel watching it. A must see for all adults.

I wanted to find a fault in this series. Any series that depicts a war should have a fault. Whether it be over-dramatisation, or bias. But this series is everything that it needs to be.
It is compiled from the reports from the wars, combined with real anecdotes from survivors, it follows a company of soldiers during WWII, from D-Day to the end of the war. It doesn't hold back. There is a plethora of death dealt in this series, and it hits both sides. It shows how the wars shift advantage from one side to the next during seasonal changes, it shows battles that were won, and battles that were lost. It shows a terrible part of our history in a way that doesn't over-glorify it, but makes you respect the people that chose to fight, whether it be in the name of protecting their loved ones, or for an honest wage.
I watched this series within two days, taking up every spare moment of my time, because it was that enthralling. The actors play real people, and express real events in a way that engages the viewer. You care about the people in this company, because they care about their company. They all have faults, but so do we, and that creates a connection that draws you in. Watching men trying desperately to stop their comrades from bleeding out, or charging into the trenches in the heat of battle, you will find yourself on the edge of your seat, waiting to see what happens.
This isn't your action movie, where you know the lead character survives. This is based on real events, and you know that every single person, has a chance of dying at any moment, and yet they continue pushing forward towards the enemy. True heroes. It reminds you why people go to ceremonies on Anzac, Veterans, or Remembrance Day.
This series carries itself on an emotional level, that make you think about what you would do if war came to your country, and highlights the importance of trying to prevent war from occurring. No matter what country you are from, Band of Brothers shows the plight that every country involved went through. Looking death in the face, gritting your teeth and carrying onwards.
Watch it, love it, and learn from it.

As a woman I would never have picked this off the shelf but as it happened to be playing on my tv and the internet looked more boring I got absolutely drawn in.

Spielburg did a fantastic job of creating stories out of a horrible war situation. There isn't too much blood & gore either.

I definitely want to watch this again.

An absolute Ten-out-of-Ten performance. Stephen Spielberg steps up to the plate, and completely knocked me for six! I never thought I'd see a war movie so realistic, especially of WWII.
From action scenes of fierce gun battles, to arguements, to the NCOs of a company resigning their positions, and refusing to work under CAPTAIN SOEBILL (David Schwimmer).
This is a thoroughly enjoyable film, and the narrations from actual D-Day "Vets" just increases the reality.
An absolute MUST SEE for all fans of war movies, especially when you have free access to a couch, 20ft projector screen, decent sound system, coffee, chips, and of course, a spare 700 mins (11 hrs, 40 mins, not including potty breaks). I guarantee you will be enthralled, entranced, and amazed by this magical multimedia masterpiece, released by Tom hanks, and the internationally acclaimed Stephen Spielberg.