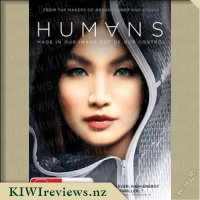 What does it mean to be human? What happens when technology has advanced to the point where it begins to truly take over our lives, affecting our relationships? Humans is a thrilling new eight-part drama, from the makers of Broadchurch and Utopia set in a parallel present where the latest must-have gadget for any busy family is a 'Synth' - a highly-developed robotic servant eerily similar in appearance to humans. These incredible machines share our homes, our jobs and our lives and so become the objects of our fear, lust, hatred, affection and even love.

Sinister, thrilling and packed full of emotion, Humans boldly explores the rapidly evolving relationship between humanity and technology and asks what does it really mean to be 'human'?

Featuring a top-class cast including William Hurt (A History of Violence, Damages), Katherine Parkinson (The IT Crowd, The Honourable Woman), Colin Morgan (Merlin, The Fall) and Rebecca Front (The Thick Of It, Just William), Humans is a riveting look at a question that gets just a little less hypothetical every day.

Special Features include: Character Profiles, Greetings from the Set, The Making of Humans, Series Overview, Being a Synth, Family Matters & Cast Interviews

Doctor Who: Season One
Rating: 9.4 Anyone who has followed my reviews would know that I am quite the fan of films and television series that revolve around the idea of the singularity; that point where AI & robots can learn, and become equal to, if not superior to humans. It always makes me think a lot of my own conflicted ideas on ethics and becoming the inferior species.

This series is (unlike most other films and series) rather unique. It doesn't go rogue. While there are still action-packed moments, the series doesn't "go terminator". There is never a real aggressive tone to any of it. We finally have a show that shows an AI that acts like a human, conflicted and confused, capable of breaking rules to both good and bad ends.

It is quite strangely done, however. The pacing is odd. I'd almost consider it to be more appropriately categorised as a subtle drama, than science fiction, as it seems more embedded in family issues, than placing emphasis on the technological advances. In fact, if it weren't for the "synth" AI characters, one would struggle to find any form of advanced technology within the entire series (Okay, there were taser shotguns, and they were awesome).

The characters are quite well done. Originally, they were a bit disagreeable, but as the series progressed, they all began to fulfil a role. The Synth characters were well cast. A pleasing variation of ethnicities and appearances. Emily Berrington and Gemma Chan (who played Niska and Anita/Mia respectively) were the most compelling characters in my opinion, though all characters were well done. Nearly every single character had a change of heart at some point; which was both pleasing for those people that I initially disliked, and annoying for those that I initially liked. But it made the show more realistic.

Quite a mature and unflinching rendition, but very slow. In reality, it could make a great fast paced film, but as a complete series (7+ hours of content), it drags on quite a bit. It began to accelerate and speed up towards the end once the background and storyline had been put in place, but it definitely took a long time to get to that point. That being said. Now that it has gotten to where it has, I am curious to see the flow of the next season. If you are a patient person, then you will certainly enjoy the series.

Dannevirke Fantasy Cave is a treasure that is unique to New Zealand. It is a special place not only for the children but also for the "young at heart". Situated in Dannevirke's main street, it is readily accessible for those passing through town with plenty of parking in the nearby side streets.

Allow plenty of time to see all the exhibits - there is so much to see! There is limited wheelchair access to most of the galleries.