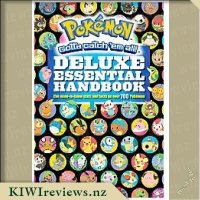 It has everything you ever wanted to know about every Pokemon, all in one place. The book includes 64 new pages focusing on the new Kalos characters that just debuted in the Pokemon X & Y videogames, plus inside info on the new Mega Evolved Pokemon.

My son (age 8yrs) loves Pokemon and it's one of the popular cartoons that I vividly remember growing up so I was super excited to receive the latest Pokemon Handbook to review. As soon as my son saw it, he dropped everything and plonked himself down in the middle of the hallway to read. He stayed there for quite some time, mostly silent but I did catch the occasional 'wow, this is awesome', which is always a good sign.

My son has two Pokemon Handbooks already (which are very well loved) but the world of Pokemon just keeps on growing and so they keep on releasing new, updated versions. This Deluxe Essential Handbook covers all the new Pokemon from the X and Y series as well as info on which Pokemon can mega-evolve during battle and let's not forget the hundreds of other Pokemon - this book includes them all!

I love how easy it is to use - there's a handy section at the front which tells you how to use it (though it's fairly self explanatory) as well as a guide to all the different types of Pokemon. The Pokemon are listed in alphabetical order with clear and colourful illustrations as well as all the different stats and facts for each one - region, type, possible moves, etc. They've even included the phonetics for each Pokemon so no more guessing and mispronouncing names.

It's a great book for encouraging imaginative play and it's really handy to have on hand during an imaginary Pokemon battle when you're unsure of what possible moves your Pokemon can do/learn (I speak from experience here). My son even loves reading it in bed and will often choose it over a regular storybook - he's all about stats and with there being over 700 different Pokemon, he always finds a new one to learn more about.

I would highly recommend this book to any Pokemon fan, young or old.

The original Pokemon is over 20 years old now. I remember when it first started as a cartoon on TV, though I never played the game. Roll on to about 12 months ago, my then 7 year old was introduced to Pokemon via Minecraft's mod "Pixelmon". Suddenly she was all about Pokemon. She had to watch every episode of the TV show, she was wearing Pokemon branded clothes, and pretending to battle. We bought her a companion book so she could learn more facts about each pocket monster.

This volume from Scholastic holds much of the same kind of information as the guide we bought. It's also way cheaper than what we had gotten her. However, it is a larger book - in A5. It also has hundreds more Pokemon that it is covering compared to what we originally bought. The cover art for this book is really neat. It is covered in circles and in each circle there is a new Pokemon illustration. Because we watch the shows, I can recognise quite a few of them. I found the black background and the layout of the pictures and font to be well presented. It just makes you want to pick it up. I noticed this more so when I left it out a few times and it quickly was picked up by children or even my husband!

There is so much information in this book because it is covering 6 regions of different Pokemon. I like that it's almost like a pokedex, giving you key information about each Pokemon, and their evolution as well as moves. I also liked the guide at the start on how to use the book and the break down of the different types of Pokemon that the book covers. Each Pokemon gets about half a page of the book, with a full colour illustration and some detail. For some they might get a full A5 page to themselves. The evolution diagrams are really helpful too.

Because we all know a little something about Pokemon, we have used this book to stop fights over who evolves into who. What type a Pokemon is, or even what their key moves would be in battle. Even Miss 3 who fancies herself a Pikachu at times, has made use of this book. Miss 8 has loved this book so much, she recently started writing her own game, which includes creatures and a guide book. Her guide book has the same layout as this book, and she uses it for inspiration all the time.

Told in a letter to her captor by 16-year-old Gemma, 'Stolen' explores the influence that a really wild and remote space can have on the inner development of a young woman.

Gemma, a British city-living teenager, is kidnapped while on holiday with her parents. Her kidnapper, Ty, takes her to the wild land of outback Australia. To Gemma's city-eyes, the landscape is harsh and unforgiving and there are no other signs of human life ... more...