« An Evening with the Modern Maori Quartet review

ProdID: 6597 - Me and Earl and the Dying Girl
Directed by Alfonso Gomez-Rejon 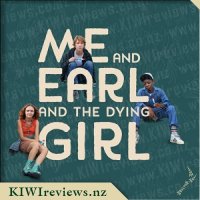 Me and Earl and the Dying Girl product reviews

Winner of the Grand Jury Prize and the Audience Award at the 2015 Sundance Film Festival, ME AND EARL AND THE DYING GIRL is the uniquely funny, moving story of Greg (Thomas Mann), a high school senior who is trying to blend in anonymously, avoiding deeper relationships as a survival strategy for navigating the social minefield that is teenage life. He even describes his constant companion Earl (RJ Cyler), with whom he makes short film parodies of classic movies, as more of a 'co-workerâ ™ than a best friend. But when Gregâ ™s mom (Connie Britton) insists he spend time with Rachel (Olivia Cooke) â" a girl in his class who has just been diagnosed with cancer - he slowly discovers how worthwhile the true bonds of friendship can be. The title of this film is peculiar. So much so, that despite receiving a double pass to see it 14 days before it is released, I ended up going to the film alone, as nobody was interested in seeing it with me. Rather unfortunate as I found the film to be rather brilliant.

Categorized as a Drama/Comedy, this film- while the plot is based around a "dying girl" -really focuses more on Greg, and his plight through his final year at high school. I'm going to come right out and admit that this movie hit me right in the feels. For those that don't know what that means, that this film ended up filling me with more emotions than a male would typically come across in his typical films. The narrative of the film is reasonably light-hearted, but most of all honest. There are no punches pulled, no Hollywood love relationships. Just a story about a boy who has tried his whole life to remain an acquaintance to everyone that he knows, in an attempt to "survive" high school without making mortal enemies. Even going as far as to refer to his best friend as a co-worker.

Largely, the "dying girl" doesn't really play too much of a part. The film delves into the effect of cancer on the friends and families of sufferers, as well as the feedback effect of the friends and families attitudes on the sufferer themselves. Due to this almost separation of the girls illness from the main events of the film, the final ten minutes of the film suddenly builds up at an accelerated rate. Such strong emotions, and it lingers for long enough that every viewer has to take the time to feel the atmosphere, and fully comprehend what it is that they are watching. No amount of preparation can really prevent you from empathizing with the protagonist.

It really came out of left field. It started off as a light-hearted film about a socially awkward boy and his friend making spoof and satire films, but it slowly built in a way that really struck a cord. I understood the struggles. I wanted it to all be good in the end, but I also knew the truth about the illnesses, so I really didn't know how it was going to end. But as you will find out, it never truly ends. You continue to learn as long as you keep looking.

I can see why this film won two awards at the Sundance Film Festival, and I greatly recommend you watch "Me and Earl and the Dying Girl". Definitely one of my top films of 2015.