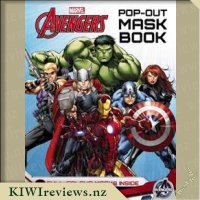 Become part of the Avengers with these eight awesome masks!

My three year old is "Marvel Mad" He was delighted when he spotted this book and even more so when the masks were revealed! TeAriki was excited to find his favorite characters including Captain America, The Hulk and Thor!

For $9 this book is great, there are eight full coloured masks inside complete with an elastic band. They are made from a durable card and easy to pop out and to put on. Mr Three can easily get them on and off himself! I was impressed the book included "Black Widow" a female heroine. I think this would be great to have at home for play or as use at a Marvel themed birthday party! I loved the variety of heroes included and the fact that with the elastic band they are suitable for younger and older children as well as adults.

I imagine with the thickness of the card the masks will be durable enough to withstand plenty of play from all the kids, TeAriki has already requested he wears the Captain America mask to kindy so it will be interesting to see how it holds up! We had a great time role playing and "saving the city".

Great for at home, for a party or for in home child care teachers!

My daughters love Marvel Avengers so they were excited to see I had a mask book with 8 of their favourite characters. Eight masks for $9.00 is bargain at just over $1.00 each especially given they are licensed characters.

In the interests of product testing I let Miss 5 remove the first mask from the book. I was rather surprised to find that she did it without ripping the mask so allowed her to remove the rest. All were removed without any damage. The attached elastic meant that as soon as one was out of the book she could wear it. The elastic was a good length. It could fit her skinny face or my larger one comfortably. In the last couple of weeks the masks have been worn by several different children and adults and they still look like new. The cardboard is thick enough to withstand wear and tear. The elastic is strong and well designed so it stays attached.

This book makes a great stocking filler, wet weather activity or something to pull out at a party (children or adults). It is well worth the money as the masks can be used repeatedly. Once the masks are punched out there is no use for the book so I have thrown it out and keep the masks in a resealable bag in our dress up box.

They died with smiles on their faces. Three apparent suicides: a brilliant engineer, an infamous lawyer, and a controversial politician. Three strangers with nothing in common--and no obvious reasons for killing themselves. Police lieutenant Eve Dallas found the deaths suspicious. And her instincts paid off when autopsies revealed small burns on the brains of the victims. Was it a genetic abnormality or a high-tech method of murder? Eve's ... more...