Star of Deltora #1: Shadows of the Master review 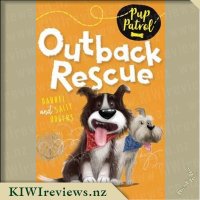 'My name is Barnaby Station Stamp of Approval, but you can call me Stamp. Join me on my next Pup Patrol adventure!'

Stamp, Ace and James are on the road again and headed up to Normanton in the Gulf of Carpentaria! But after all that rain from Cyclone Julia, some of the roads have flooded. When James takes a detour, there's plenty of time to make some new friends at Camp Billabong along the way.

The outback is a strange and lonely place and the Fourby pack are travelling carefully through the dusty desert. But who does that abandoned car belong to? And can Stamp and Ace find them in time to help?

You know a story is not a fail when your 9yo daughter reads it in two days, and then names her new dog soft toy 'Ace' lol. Outback Rescue is the fourth book in the pup patrol series, but the first one my daughter and I have read. However further investigation into the other three books in the series, and miss 9 has asked me to please source the others.

Pup patrol is an Australian series, that sees James, Ace and Stamp having an adventure in the Outback. After a cyclone causes flooding and roads are closed, James and his dogs end up at Camp Billabong, the adventurous and mischievous Ace learns that his antics aren't the best around the camp dogs, and when in someone elses home, good behavior is the best behavior to have.

Although we have only read the one book, miss 9 fell in love with the at times naughty Ace. She adores dogs, so any story that is based on dogs is almost always a guaranteed hit with her. I loved that not only did I get to have mother and daughter time sharing a story, but we also learnt a lot about the Australian outback. The dogs in this story are personified, so we always know what they are thinking, feeling, and saying to each other, which is great! And the bond between man and his dog is shown greatly within the story line.

As I have already said, this is the first we have read in the series, so it was really cool that the book started with an introduction by Stamp, and then a list of who is who within the characters, and then stamps glossary of words is in bold type at the end of each chapter, which is a really fantastic learning tool. This is not only a great story to read but also teaches valuable lessons about keeping safe and stuff. There is information on dog breed behavior, as well as a bit on the dangers of snakes and spiders, which my girl related to more so because of the link between that and Ace and Stamps encounter with the snakes and spiders in the book.

This was a really enjoyable read, and I can not wait to find the other 3 books as per her request

Outback Rescue is the fourth book in the Pup Patrol series. I have read the first three to my girls (5 and 7 years old) and they have really enjoyed them. They were excited to see that I had the latest book for us to share. This book certainly didn't disappoint us. Split into ten chapters I read 2 or 3 chapters a night to them listening to my every word.

As the title suggests this book is set in outback Australia. Dogs Stamp (the narrator) and Ace are travelling around with their owner James. Stamp is the sensible book but Ace is young and mischievous. My girls love Ace and his antics often have them giggling. Near the start of the book Ace is trying to catch hens and barks "Hen, hen, hen. Hen feather hen." Miss 5 was in hysterics at this and for days afterwards come out with this phrase at the most random of times. The dogs are also the heroes and finish the book on a happy note.

This book is more than just a novel, like the others in the series it has important messages for both children and adults to remember. It talks about what you should do to stay safe in the outback, how to select a puppy as well as warnings about snakes and spiders.

Along with the other books I have put Outback Rescue on the bookshelf for my girls to read themselves in a year of two when they are capable. I am sure they will enjoy it just as much then as they did the first time. I have checked the website and there is no sign of a fifth book but if their is I'm sure we will be reading that too.

Geronimo Stiltonix and his crew head to the planet Jurassix to warn its inhabitants of a giant comet heading straight toward them! But the creatures there turn out to be ferocious, dinosaur-like beasts . . . who like to eat rodents. Squeak! Can the spacemice save these aliens and still make it out alive?