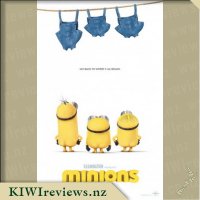 Continuously unsuccessful at keeping these masters - from T. rex to Napoleon - the Minions find themselves without someone to serve and fall into a deep depression. But one Minion named Kevin has a plan, and he - alongside teen-age rebel Stuart and lovable little Bob - ventures out into the world to find a new evil boss for his brethren to follow.

The trio embarks upon a thrilling journey that ultimately leads them to their next potential master, Scarlet Overkill (Academy Award winner Sandra Bullock), the world's first supervillainess ever. They travel from frigid Antarctica to 1960s New York City, ending in modern London, where they must face their biggest challenge to date: saving all of Minionkind...from annihilation.

I'd seen the trailers for this movie but I wasn't too fussed about seeing it, I knew it was about the Minions and how they wound up as Gru's minions, but hadn't seen any trailers that talked about Scarlet Overkill, so I was going into the film expecting to be surprised. I went to this with my husband and three kids and the kids were all hooked from the first scene. I myself loved the start of the film which featured how the Minions evolved and how they muddled along trying to find a new boss, in all honesty I probably would have enjoyed the movie had it stuck to similar format throughout the movie.

Eventually the find out aout Scarlett Overkill and set off to get her as their boss, which is entertaining but it didn't grab my attention as much as the start did. There are some fun moments as they try to steal the crown for her and so on, as well as some nods at moments in history, though some not 100% accurate in timing, at least it's a kids movie... I do love the minions and how they talk, their innocence and desire to please as well as being loyal. We do find out how they end up working for Gru, though there was one little thing that irritated me about it but spoilers.. so my lips are sealed.

While this was a fun movie, I far preferred the first two movies, maybe if they did a couple of short films about the different bosses, I think I would enjoy that more. Still... the kids adored it and can't wait to watch it again.

When four outsiders saw what the big banks, media and government refused to, the global collapse of the economy, they had an idea: The Big Short. Their bold investment leads them into the dark underbelly of modern banking where they must question everyone and everything.