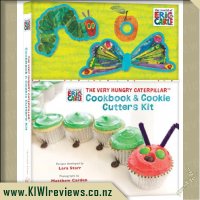 Featuring Eric Carle's The Very Hungry Caterpillar, this cookbook contains 25 delicious recipes as well as 3 shaped cookie cutters: the beloved caterpillar, a circle for the caterpillar to crawl through, and the beautiful butterfly. Recipes range from breakfast and snacks to beverages and sweets. Perfect for everyday fun as well as book-themed parties, very hungry kids will rejoice in cooking and eating as well as immersing themselves in the world of their favorite characters.

My girls were so excited when they saw this kit. They love The Very Hungry Caterpillar book so getting their hands on the cookie cutters was a must. We loved how this was packaged with the cookie cutters backed by the illustrations of the caterpillar, butterfly and hole in the apple. The packaging was as much a source of enjoyment for the kids as the cutters and the recipe book. Reading the back of the packaging it seems that this kit is directed towards children and it was my expectation that this would be a child appropriate cookbook that my girls could use.

I was cooking pancakes for lunch and we were out of bread so Miss Seven wanted to recreate the picture on the back of the box of butterfly sandwiches. We found some sprinkles in the cupboard and the girls got to work making butterfly and caterpillar shaped pancakes which was a lot of fun. The cutters were then used for making caterpillar and rice shapes for dinner and the next night for potato.

We went through the book to decide what to make next and what struck me first was that most of the recipes the ingredients were on one page with a full colour picture and then the instructions on the following. This was a problem for several reasons as it meant having to constantly turn the page back often with messy hands. The print was quite small and the instructions for a few of the recipes read in such a way that even I found it hard to follow.

I think this book would have been better in a larger print (font) size and perhaps in an A4 size to make it easier to read and follow the instructions. I was also surprised that one of the recipes apple berry punch, which Miss Eight was very keen to make thinking it would be like a smoothie, had two ingredients strawberries and apple cider..... It almost seemed like this book would be a great one to use for a The Very Hungry Caterpillar themed party more than as a cook book to use with children as there are some fantastic ideas in here.

I find myself flicking through this in the evenings reading the recipes and trying to get my head around some of them so it gets top marks for re readability and the photos and illustration's are lovely and very eye catching. There are definitely some great ideas in here and I look forward to making more of the recipes in summer when we have an abundance of watermelon and strawberries etc.

Overall I guess if you want some ideas for a Very Hungry Caterpillar party then this would be a good book to get and the cutters are lots of fun but in terms of just a general cookbook for kids this wouldn't be my go to as I think many of the recipes are just to complex and the print to small for children (or in my case their mum) to follow.

The Very Hungry Caterpillar book is well-known by most, if not all, children growing up in New Zealand. A cookbook to go with it seems like a fantastic idea. The storybook itself involves a lot of different food and it would be a fun way of introducing different foods to children. I got very excited when I saw this set

The fact that the cookbook has the photos of a cupcake caterpillar on the front drew my eye to the set. The colouring and style of the package allowed me to easily recognise it as linked to The Very Hungry Caterpillar kids book.

Flicking through the book, I saw that great photos and illustrations carried on throughout the book. It felt bright, colourful and exciting. On closer look, I was a bit disappointed about the fact that, although the set seemed like it should have been aimed at children, the font was very small in the recipes. I also found that the text in the instructions was way too detailed. I think that a child would find it difficult to follow and as an adult, I found that there were too many words to tell a simple instruction. It would probably help if the instructions were broken down into shorter, simple steps.

I found that it was difficult to flick between several pages to work with one recipe. In some cases, the ingredients and photo are on one two-page spread and the instructions are on another two page spread. This would be extremely difficult for children to follow.

I did like the fact that all the cup measurements also have the measurements in grams/millilitres in brackets. Although, we usually refer to millilitres as 'ml' and I think that may be more appropriate and completely acceptable.

There are some inconsistencies in the book. For example, in the Swiss Cheese & Mushroom Melts recipe on page 45, the first reference to a 'quesadilla' is part of the way through the instructions. With no previous information for a child to know what that was, it is a bit confusing.

I found that the recipes jumped all over the place, from fruity snacks, to savoury, to sweet and didn't seem to have a logical progression, either through meals in the day or by grouping different types of recipes. I thought that maybe the recipes were trying to follow the food items as they appear in the book. This confused me a bit more as they did sometimes follow that order and other times are out of order. The illustrations that go with the various items of food are sometimes out of sync with the items in the book e.g. the actual book has three plums and the cookbook has four plums. It seems like an attempt to match up with the book but not quite getting there.

In most cases, the ingredients are either items which families would have at home or could easily access (assuming the fruit was in season). There is a mix of sweet and savoury recipes to interest all tastebuds.

The recipes do allow children to experience a range of different foods and preparation methods. The safety instructions at the front are a good idea to refer to when children start cooking. Reading them, however, would still require quite a bit of adult assistance. Perhaps some simple illustrations could have helped here. The ideas could have been grouped sensibly as well. For example, safety rules, healthy eating ideas, skills to learn etc. The list of ideas currently seem like a brainstorm of ideas rather than a well thought out sequence of rules/instructions.

Our family have taken a shine to the Tasty Salami Pockets recipe. We have been making the pockets with all sorts of fillings. This is certainly something that we will keep as a family favourite.

The included cutters are a great idea. My children have enjoyed using them to create shapes to go with The Very Hungry Caterpillar out of bread, pikelets etc. They would be very handy for a kids birthday party on this theme.

To be honest, even with my initial excitement about this set, I have been left disappointed. I am still not sure if I would say it is aimed as a children's cook book (which I think it should have been) or as a book for adults to create a themed birthday party.

NB - As I have mentioned, I really liked the idea of this book and was disappointed. In order to give a fair review, I got a number of friends and family to look through the set to see if I was giving it an accurate review. Between them, they came up with the same points as I have done above.