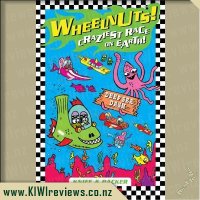 Eccentric billionaire Warren 'Wheelie' Wheelnut has decided to mount the biggest, maddest, most off-the-scale competition ever! He has created five extreme racetracks: from underwater to the desert, outer space, a haunted town and the jungle...it's not chicanes and hairpin turns the drivers need to worry about, but aliens and giant squid! Deep Sea Dash takes the teams on an adventure beneath the waves to face polar bears, giant squid and undersea volcanoes! Which team will defeat sharks, jellyfish and more, to cross the finish line first?

We have read all of the Wheelnuts books so far and while they may not be my personal choice as far as reading materials go, my son absolutely loves them and that's all that really matters. This is the 4th book in the Wheelnuts series and this time the racers find themselves going deep under the ocean.

One of the things that appeals about these books is the fact that in this race there are no rules so you never know what surprises are in store and it's impossible to predict what's going to happen next. The racers and their vehicles are quirky and colourful and each have their own specific upgrades and special features which are often of a humorous nature. Each page is bright and fun which perfectly reflects the nature of the race. However, it is difficult to make out some of the text on the dark coloured pages - it isn't too much of a problem for me but it would make independent reading more difficult than it needs to be for my son. The chapters are a decent length and there are lots of words on each page but the story really captures my son's attention as there is never a dull moment.

Each book seems to follow a specific formula which in this instance works - lots of challenging obstacles to overcome, cheats, a bad guy and teamwork. I like the inclusion of teamwork as it's a good message to get across.

At the back of the book is a sneak peek at the next race and also a search and find page. My son had fun searching for all the different sea creatures and it was a great little bonus. I can see us reading this book over and over again and I can't wait to see what new obstacles and challenges face the racers in the next book.

I sat down with my children the other night and started to read this with them, in my eldest's bedroom. The children were excited to be sharing some time with me, reading to them both. I usually do a separate reading session, but I felt this book might interest my youngest as much as my eldest.

The things that really caught Miss 3's attention with the book, was the illustrations. This book goes completely over the top wild with vibrant colour. Every page is in full technicolour! The backgrounds, and all the characters. To my eyes, it was almost a little painful trying to read the black text on some of the pages (but not all). However, the pictures really delighted Miss 3. Miss 8 also enjoyed the pictures, but was far more interested in how each picture related to the story as it unfolded.

The story itself was intense and full of adventure, as any Wheelnuts race is. There are the portions of the race with the checkpoints and the gold stars, as well as the challenge. The books tend to follow that layout, with a different set of issues they face depending on the habitat they are in. They also have different cheats they can do, which cause havoc for the other racers. These are fun to read, as my eldest especially giggles at the outcome of each thing. I'm not sure she had a favourite Wheelnut crew this time around, but last time the fairies were it. I liked the Dino crew and the babies, they were funny.

A few of the situations that the Wheelnuts found themselves in, also helped me teach the girls something. We talked about all sorts, from weird overseas beauty routines, to explaining what an Atoll is. Nice to be able to talk about ocean animals with the little pictures of each, even if they were cartoons. I could then Google them to saw them more. The funny thing was, that as most of the stuff existed, one thing in the water really amazed my eldest and she thought there really were this type of "toy shaped" animal in the ocean. Tricky tricky!