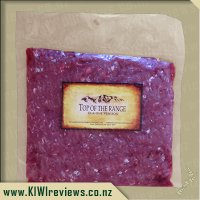 Disclosure StatementFULL DISCLOSURE: A number of units of this product have, at some time, been supplied to KIWIreviews by the company for the purposes of unbiased, independent reviews. No fee was accepted by KIWIreviews or the reviewers themselves - these are genuine, unpaid consumer reviews.
Available:
via Online Store and selected retailers nationwide

Top of the Range venison is a quality product that ticks all the boxes - affordable, tender, healthy and sustainable. Give it a try!

Having tried their Venison Steaks in the past, I already knew the meat was top-grade and as fresh as it could be without having the animal standing right in front of me an hour earlier. Added to the 'plus' side of the ledger for me is the fact I have always seen minced meat as the most versatile 'cut' of all, despite the qualms some people have with it. So, this was going to be a double-whammy fun one for me.

I was given 2x 400g packs to experiment with, and while I really wanted to avoid the cliche "savoury mince" or "spag bol / lasagne" options, they are really good ways to use any form of minced meat... so I compromised. Too many years ago, when I was but a youngster, I was once given a steaming hot baked bread roll, inside which lurked an amazing meaty treat in the form of a pulled-pork of some kind. While I have never really become a total fan of pulled pork as a whole - despite a few pleasant encounters in recent times - I really loved the idea of the meat being baked into the buns, and have wanted to do my own version ever since. This was my chance!

So, not wanting to drown out the delicate taste of the venison, I did a basic fried mince dish, using some diced onion, capsicum, pepper and salt, and then added some of the mild tomato & garlic sauce I had made earlier in the year. I also sweetened it by adding some Feijoa Port near the end. Then the tough bit - making bread dough. I am not a good bread-maker by any stretch, but I took great care not to over-knead the dough and the result was good enough. I won't go into the details of the full process, as it's not really relevant to this product, but the end result was quite pleasing and I was able to eat the results without ill effects, so that was a win.

I also used the mince to make some hamburger patties, but those didn't turn out so well because I forgot to add egg and breadcrumbs to the mix and despite the naturally superior binding abilities of Venison, they fell apart when I tried to flip them... so... more savoury mince. I used that in some toasted sandwiches, on toast under poached eggs, and as filling for some cannelloni... all of which were just as enjoyable, but it's the stuffed buns I am most proud of and that I feel highlighted the full flavour of the venison mince to it's best.

Overall, yes, this is more expensive than beef mince - but at $17.50/kg is it cheaper than chicken, is much healthier for you, has a much deeper and richer flavour profile, and something most people would consider a 'treat meat' yet would fit within most budgets that can deal with buying chicken meat. So... what's not to love about it?