ProdID: 6356 - I'll Be there
Written by: Holly Goldberg Sloan 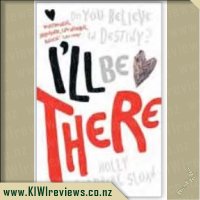 I'll Be there product reviews

Emily believes in destiny. She's waiting for the moment her real life begins.

Sam wishes he could escape. He's spent his life being dragged from place to place by his father. But he could never abandon his little brother.

Then everything changes when Sam meets Emily.

I think the first thing that really draw me to this book was the cover. It's pretty simple. There's really just a white background and the words as well as a plain heart. I didn't connect the title to a song, but it is connected and that connection becomes more obviously part way through the book.

When I first started reading the book, I was thrown a little by the way it was written. It's in 3rd person, so we are on the outer of the situation, but we jump around into many characters' heads. This was at times confusing. Sometimes the information was presented in a very matter-of-fact way too. This made for some jarring revelations about Sam's situation in particular. I found myself having to read and re-read pages involving him and his family, just to take in how horrific the information really was.

For Emily's side of the story, it took me a while to warm to her. I think, she is quite similar to how I was as a teenager. Pretty normal family life, normal hopes and dreams. Head full of thoughts that are so mundane and often pretty silly. I guess because she was quite like me at that age, I took a while to warm to her because I just had that cringe factor. Often I just wanted to get back to Sam and what was going on for him, because his story was far more engaging for me.

But Emily and her high school friends do add some much needed humour. There is one or two chapters in particular where the comedy is well timed with the intensity of the rest of what is going on. You kinda just needed it to be a little silly for a bit. I didn't identify with Sam, as such. But I felt like it was a privilege to glimpse inside his world. I felt a huge connection to his brother and I was really trapped with this book particularly in the last half of the book because I just had to see what happened to him.

Despite my initial concerns about the writing style, I think it works to be slightly detached from the proceedings. I think if it had been written in 1st person, it would likely have been even more intense in places. This was a great book, and a riveting story. It starts out feeling like a romance, but there is a lot more going on in it. It's more of a tale of survival and about holding onto what is most important in life.

In the Micronesian Islands, a top-secret, US Government-sponsored undersea lab conducting vital biomedical research on a rare jellyfish known as the Blue Medusa suddenly disappears. At the same time, off Bermuda, a bathysphere is attacked by and underwater vehicle. Stranded half a mile below the surface, its passengers - including Zavala - are left to die. Only Kurt Austin's heroic measures can now save them ... more...