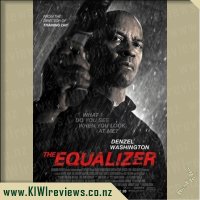 Robert McCall (Denzel Washington), a man of mysterious origin who believes he has put the past behind him, dedicates himself to creating a quiet new life. However, when he meets Teri (ChloĂ« Grace Moretz), a teenager who has been manhandled by violent Russian mobsters, he simply cannot walk away. With his set of formidable skills, McCall comes out of self-imposed retirement and emerges as an avenging angel, ready to take down anyone who brutalizes the helpless. I found out while listing this movie that it is based on an old television series, which made sense; the film is portrayed in a way that gives the feeling that the viewers would have some prior knowledge of the protagonist. While it is a great standalone film, that doesn't require any previous knowledge of the characters back story, it still progresses slowly and the depth of the character is very slow to develop over the film. In fact, if it weren't for about 10 minutes of the film (at around 74 minutes) there would have been no mention of his past at all for the entire film, and he would have come off as a creepy psychotic old man with a desire to kill.

In fact it does still come off like that; but it is enjoyable nonetheless. The protagonist has the analytical prowess of Robert Downey Jrs 'Sherlock Holmes', combined with the fighting skills of Jason Statham's 'Transporter' and the complete annihilation of Sylvester Stallone's 'Rambo', all with the body of an old retiree.

It was interesting to watch several independent "good deeds" suddenly linking together in a large web of connections. Watching Robert McCall switch from hesitant helper, to the active assassin was interesting. You watch plans and traps put in place, watching diversions and distractions put to work. While most of it does seem rather unlikely to be able to come up with and put in place in the amount of time provided, it still comes together seamlessly.

While it took a little while to get started, the film accelerated quickly once the action started, and kept up a rather high rate of action up until the end.I did have a "laugh out loud" moment at one point in the film, during an incredibly clichĂ ©d walk away from an explosion, but largely, this film put a new spin on action heros. The quiet, unknown, killer.

A group of old friends reunite at Sydney's Palm Beach to celebrate a special birthday. However, the fun soon gives way to the messy realities of life.