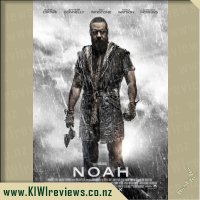 When God decides that mankind has become too sinful and must be wiped off the Earth, he chooses Noah (Russell Crowe), a pious man, for a great task. Noah must build an ark large enough to hold his wife (Jennifer Connelly), adopted daughter (Emma Watson), sons (Logan Lerman, Douglas Booth, Leo McHugh Carroll) and their wives -- plus breeding pairs of every animal. When the task is completed, Noah and his family witness God's wrath in the form of an apocalyptic flood. Where to start...
Well, I didn't like it. Let's start there. The film is based on the biblical story of Noah being told to build an ark and collect animals to survive a flood. Why was the film therefore over two hours? Far too much filler.

The opening sequence was fine. A quick summary of creationist beliefs, which seemed to incorporate a bit of evolution into it. The images used however will be used again and again, repeating itself to fill in time throughout the film. The use of a "flipbook" style video to show the evolution and multitude of organisms, was interesting, but overused. And the abrupt stop at primates before humans were created independently was obvious. But as a scientist, that sort of thing I would be looking for.

I did do bible studies in primary school, but never were giant rock golems mentioned, so their presence confuses me, and feels like they are trying to piggyback off of the popularity of the 'Transformers' franchise (Watcher were mentioned in the Book of Enoch though).

I had always been told that The Creator (never actually mentioned by the name 'God' in this film) helps those that help themselves, and yet everything is spoon-fed. The instructions, the materials, the labour, the animals, it is all provided with little effort from Noah himself. While I don't know enough about the Bible to truly advocate its inaccuracies, I can still say that it is lazy, and doesn't make for a great film.

I almost left twice during the film as it just bored me. I let out an audible sigh when the flood had occurred and yet the film still had an hour to go. There was little plot after that point beyond what was created by the addition of the adopted daughter to the story, so the next 55 minutes were unnecessary beyond trying to create drama out of nothing.

Visually, it was reasonably well done. The floods were pretty convincing, and the jungle looked real. And it certainly was a unique retelling of the story But the presence of these "watchers" ruined it for me. That combined with the unnecessary final hour of the film? I'm sorry but I won't be watching it again.