The Last of The Spirits review 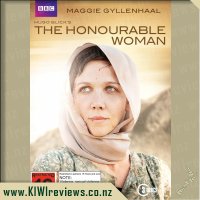 As young girl, Nessa Stein witnessed the assassination of her father by the armed wing of the Palestinian Liberation Organisation. Now in her late thirties, Nessa is at the forefront of the Middle East peace process. Ennobled for her campaigning work, the newly made Baroness must fight forces that are conspiring against her as she awards a highly lucrative contract to a Palestinian businessman.

When he is subsequently killed, Nessa and her brother come under the close scrutiny of Whitehall and the Secret Intelligence Service. Set against the gripping backdrop of government paranoia and espionage, The Honourable Woman tells the story of one woman's personal journey to right the wrongs conducted in a past life. This series looked interesting, purely because it was delving into the unknown and rather confusing topic of the Middle East, looking at the peace process between Israel and Palestine. The magnitude of complexity of the situation, and the rather one-sided and biased media coverage that the area garners, meant that this series would be stepping largely into the unknown for most viewers.

The first thing that occurred to me, is how much I rely on recognising names with non-caucasian characters. I found the similar looks of many of the characters, and the rather unique names (e.g. Atika, Ephra, Mazel, Shlomo, and Kasim) threw me off, and initially made this very hard to follow. It took several episodes before I was able to appropriately recognise the main players in the series, and therefore properly follow the plot.

The storyline itself was lacking uniformity, sometimes rushing forward, sometimes slowing right down, sometimes skipping backwards and following a back-story through several years in the space of 5-10 minutes. If I was watching this on television, I honestly would have stopped watching after the first episode or two. But as I had the full series on disk, I didn't need to wait a week to watch the next episode, meaning I could quickly see whether the show improved.

And improve it did! The viewer had the "secret" revealed to them rather early on in the series, which helps to fully appreciate the "current" storyline. The environment quickly escalates and - as would be expected - there are significant casualties. It is strikingly blunt in many regards, and I think it is successful at visualizing the many different opinions and frames of mind regarding the wants of the various conflicting factions of the Palestinians, Israelis, Americans, and British "stakeholders".

It is layer upon layer of convolution and deception, with every character doing absolutely everything within their power to get the result that they want. Unfortunately every character has a different goal. And despite the rate at which the series accelerated, there were still many rather unnecessary subplots. Perhaps it would have been better shown as a 6-part series, who knows. Stephen Rea was the most convincing actor (playing Sir Hugh Hayden-Hoyle) with whom I empathised the most, closely followed by Igal Naor (who played the ever supportive Shlomo Zahary).

Hey Presto! Hold on to your magic hats and get ready for some magical fun!

Hi-5 wave their wizardy wands and scatter their fairy dust to create a world of Hi-5 fun! From magical creatures on daring adventures to a trip on the Dancing Bus, say the magic words and join a fantastical trip with Hi-5 Hey Presto!